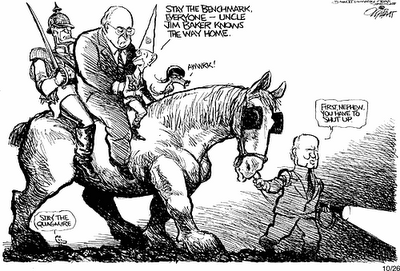 These are tough times for the dwindling number of people who still believe that the Iraq war is just and must be fought to its conclusion.

Many a deep thinker, some with impeccible conservative credentials, have had their fill of the lies, distortions and unrelenting bloodshed, and while they supported the war in principle back when, they conclude after much soul-searching that they cannot do so any longer in good conscience. And then there are a goodly number of fair-weather supporters who have cut and run as public opinion has turned against the Mess in Mesopotamia.

Among the hawks who are blathering the no retreat-no surrender line are knuckle dragging bigots who believe that the only good Iraqi is a dead Iraqi and anyone who doesn't agree with them is a tree-hugging John Kerry synchophant. The Belmont Club, an otherwise terrific blog with a conservative bent that is one of my daily reads, is a magnet for the offal of snivelers of this sort, who include the especially despicable "habu1," a coward who retreats when confronted with his ugly screed.

Then there are semi-intellectuals like Victor Davis Hanson who argue that the U.S. must stay the course, even if The Decider in Chief has dropped that particular phraseology.

But Hanson is feeling a tad lonely these days and it is a sign of his desperation that he has resorted to using the "mine is bigger than yours" argument in claiming that many Washington commentators were not really behind the war in its early days like he was, so it's been easier for them to cut and run:

"Watching and reading the recent Washington punditry, whether in print or on television, is a depressing spectacle. Almost all—Charles Krauthammer is the most notable exception—have somehow triangulated on the war, not mentioning why and how in the B.C. days they sort of, kinda, not really called for the overthrow of Saddam Hussein. For some the Road to Damascus was the looting or Abu Ghraib, for others the increasing violence. Still more now say the absence of WMD did the trick.

"But almost none of the firebrands of 2003 speaks the truth behind the facade: They supported the war when it looked like few casualties and a quick reconstruction and thus confirmation of their own muscular humanitarianism—and then bailed along the way when they realized that wasn’t going to happen and the unpopular war might instead brand them as 'war mongers,' 'chicken-hawks' or just fools.

"Instead of that honest admission, we get instead either cardboard cut-out villains of the 'my perfect three-week war, your screwed-up three-year occupation' type—a Douglas Feith, Gen. Sanchez, or Paul Bremmer—or all sorts of unappreciated and untapped brilliance: from trisecting the country to 'redeploying' to Kurdistan, or Kuwait, or Okinawa?"

(Cartoon by Pat Oliphant/Universal Press Syndicate,
and yet another hat tip to Glenn Reynolds at Instapundit.)
Posted by Shaun Mullen at 2:24 AM
Email ThisBlogThis!Share to TwitterShare to FacebookShare to Pinterest