The Final Excerpt du Jour on the Iraq War 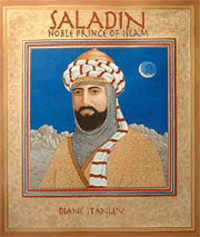 Here is the last of 20 excerpts from "Fiasco: The American Military Adventure in Iraq" by Thomas Ricks.

Ricks concludes with a discussion of a number of possible scenarios for a future Iraq because of what he regretfully believes will be a failed U.S. mission. He believes that regional wars in the Mideast are one possibility.


That dark vision is not the worst possible outcome. Even more worrisome would be that perhaps in the wake of those regional wars, a new Iraqi leader emerged to unify his country, and then perhaps the region. . . .

There is a precedent for the emergence of just such a figure: Salah el-Din Yusuf, or Saladin, as he was known in the West, came out of the fractionalized chaos of the twelfth-century Mideast and rose to power in response to the invasion of the Crusaders. He was the son of a Kurd who had been the "governor" of Tikrit. "He was a man of great ambitions, but simple and modest in his private life, careless of protocol and so good-natured as to be almost weak," wrote Zoe Oldenbourg, the French historian of the Crusades. He also unified the Arab world in responding to the Crusader invasion.

The new Saladin would emerge first as a relief from the madness of chaos and terrorism. He would be a unifer, bringing together the disparate and weary parts of Iraq. He might even extend his influence beyond Iraq's borders, calling for the revival of the Arab world. Bolstered by Iraq's oil revenues, he might succeed in creating a wave of new pan-Arab feeling. Riding that wave, he might confront the West as it hasn't yet been -- that is, as an Arab leader combining popular support with huge oil revenues. And he may seek also to harness that oil money to a new program to secure nuclear weapons. Such a program could threaten the existence of Israel or, by secret means of delivery, New York or Washington. Before that happened, the West would have to consider a war of preemption -- but this time its soldiers might really face nuclear, biological or chemical weapons.