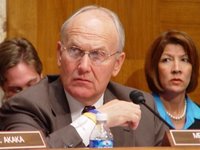 There seem to be a heckuva lot of congressfolk looking over their shoulders these days and waiting for the next shoe to drop in the congressional page scandal. Poor dears!

Rumor has it that a Republican congressman from Illinois is about to take a powder because he messed around with a 16-year-old female page, while more testimony is expected regarding a years long cover-up by the House GOP leadership of disgraced Representative Mark Foley's serial deviance involving male pages. More here. and here.

Foley, who still is hiding out in an alcohol rehab center, has said that he is going to name the Roman Catholic priest whom he alleges abused him as a youngster, which we are to believe set him off on a path that led to homosexuality, alcoholism and God knows what else.

But in a pre-emptive strike, the priest has gone public.

The Rev. Anthony Mercieca says he had an inappropriate two-year relationship with Foley in the 1960s that included massaging him in the nude and skinny-dipping together at a secluded Florida lake, but he did not specifically remember having sex. Check that. He says there was an occasion when he was in a drug-induced stupor and may have gone too far.

This raises a rather pungent question: Do you get a go free card if you're a priest and did not fellate, sodomize or otherwise make physical contact with the vulnerable youngsters you preyed on?

I attended a funeral mass for an old friend earlier this week led by four Roman Catholic priests. How sad admidst the eulogizing and hymn signing I pondered whether any of them were pedophiles but the church had covered up for them.

MEANWHILE, OUT IN GAY OLD BOISE
Senator Larry Craig (see photo), an Idaho Republican and leading Capitol Hill gay basher, has engaged in same-sex relations for several years, according to blogger Mike Rogers, who dropped the bombshell on a syndicated satellite radio show.

Rogers, who has questioned the sexuality of other Republicans in the past, asserts that after two years of research that he is "100 percent solid" with his information and has spoken with men who have been sex partners with Craig, including in bathrooms at Union Station in Washington, D.C.

(Begin usual disclaimer here) I have no problem with gays. Some of my best friends are gay. But if you want to trip my hypocrisy trigger, then be a politician like Mark Foley who talks the anti-gay talk but walks the gay walk and furthermore uses their office to further their sexual proclivities. (End of disclaimer.)

Craig's sexuality, like Foley's, has been an on-again, off-again issue since the 1983 congressional page scandal when he curiously stated that he had no role in the sleazy affair although no one had suggested or asked him if he was involved.

More here and here.
Posted by Shaun Mullen at 1:09 AM
Email ThisBlogThis!Share to TwitterShare to FacebookShare to Pinterest