How the Cleaver Family Didn't Save Iraq 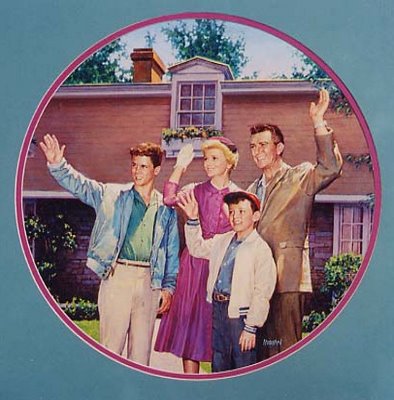 Bye-bye Mayfield. Fallujah here we come!
It is testimony to how quickly things have unraveled in Iraq this year that only five months ago I spoofed on a New York Times story on the exodus of middle-class Iraqis out of the country, which today seems like the least of this devatated country's problems.

While the exodus was not a happy turn of events in and of itself, I tried to bring some levity to it by suggesting that the White House begin a program to send middle class conservative Republicans who slavishly supported the war to Iraq to replace those fleeing middle-class professionals.

This bit of satire -- which exposed the hypocrisy of the Bush administration and many of its supporters -- focused on the Cleaver family from "Leave It to Beaver," a popular 1950s TV sitcom that, it seems, will forever be in reruns.

I'm reprinting this post, originally called How the Cleaver Family Saved Iraq as a reminder one week from mid-term elections that The Decider never asked Americans to make sacrifices for his Excellent Adventure in Mesopotamia. Today his hubris is more evident than ever.

The Cleavers -- Ward, June, Wally and The Beaver -- arrived in Fallujah in September 2006. They decided on Fallujah because it is less than an hour's drive to Baghdad, has a storied history as a religious center and is located on the Euphrates, where Ward and the boys could go fishing.

Leaving their home in Mayfield was not an easy decision, but there is a lot about Iraq that mirrors the Cleaver family's conservative Republican values:

Iraqis are very religious and inject their faith into every aspect of government and society.

They honor the nuclear family and oppose abortion and homosexuality.

Women are treated as inferiors.

Carrying and using weapons is widely accepted as a way to uphold one's political views, religion or honor.

The Cleavers found a three-bedroom house on Dahri Drive in a middle-class neighborhood of Fallujah that was nearly deserted because most of its residents had left the country. The street is named for Shaykh Dhari, who was killed leading a 1920 rebellion against the British occupation.

There was some damage to the carport from a bomb blast that had destroyed the neighborhood police station, but Ward and the boys made quick work of that while June spiffed up the kitchen.

It didn't make sense to ship over the Frigidaire, stove and washer and dryer, but through a special program underwritten by the Jack Abramoff Foundation, the Cleavers bought new appliances at a discount through the exchange at a U.S. Army base. As members of the Finding Unity Beyond America's Realm (FUBAR) program, they also qualified for income tax breaks normally only available to wealthy Americans.

Unfortunately, the power is on only a few hours each day, and June jokes that she seldom can do a load of laundry or prepare a meal without interruption. But her only real complaint is that she just can't get comfortable wearing the cumbersome burka that she has to put on whenever she leaves the house.

* * * * *
Ward works for Halliburton, a big U.S. contractor that had been paid tens of millions of dollars over the last three years to get Fallujah's power grid up and running. His job is to writes lots of reports for the U.S. Provisional Authority.

June, of course, stays home, although she keeps busy homeschooling the boys, volunteering with The Beaver's Boy Scout troop and selling Avon products to her Iraqi neighbors.

Wally and The Beaver really miss their old friends, but are trying hard to assimilate. Their biggest disappointment has not being able to go fishing because the Euphrates is so polluted. The city's sewer system remains damaged from U.S. bombing and nothing can survive in the river.

One of Wally's first purchases was a jacket with الفلوجة, which is Arabic for Fallujah, stitched across the back and The Fedayeens on the front. The Fallujah Fedayeens are a baseball team that Ward and other Halliburton dads started. Wally is taking Arabic language classes and is hanging out with the rifle club at the local mosque.

The Beaver is the most homesick member of the family and spends hours in his room instant messaging his old friends on his computer when the power is on.

The Cleavers have been disappointed that not more middle class Americans have heeded their president's call to start new lives in Iraq, but there have been glimmers of success. Eddie Haskell has promised to visit them next summer. And the Fedayeens finished first in their league. Unfortunately, they were unable to play in the regional championships because of a local curfew.

The Cleavers recently did get some truly exciting news. Another American family will be moving into their neighborhood: The Simpsons.

Posted by Shaun Mullen at 3:18 AM
Email ThisBlogThis!Share to TwitterShare to FacebookShare to Pinterest