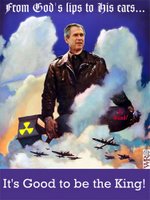 With less than two weeks before Election Day, The Decider wants to talk about how flexible he is willing to be regarding the war in Iraq, while Republican candidates are running from anything to do with it.

"Republican candidates around the country have been trying for months to de-emphasize the war as an issue, and to distance themselves from Mr. Bush more generally. . . . If his party’s candidates want to change the subject, Mr. Bush surely did not help them on Wednesday. While the deteriorating situation in Iraq and the tumult over the war has already thrust the issue to the center of the political stage, Mr. Bush spent more than an hour discussing Iraq with reporters at the White House, acknowledging the overriding importance of the issue and stating flatly that he should ultimately be held accountable. . . .

"George C. Edwards III, a presidential scholar at Texas A&M University, said the president’s appearance on Wednesday was both an act of political desperation and a possible turning point in the war. He cautioned, however, that little in Mr. Bush’s record indicated he was capable of a radical change of direction.

Posted by Shaun Mullen at 3:28 AM
Email ThisBlogThis!Share to TwitterShare to FacebookShare to Pinterest