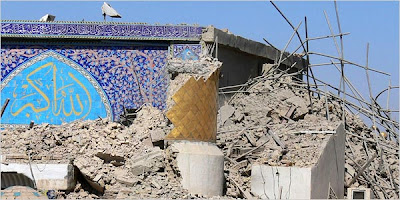 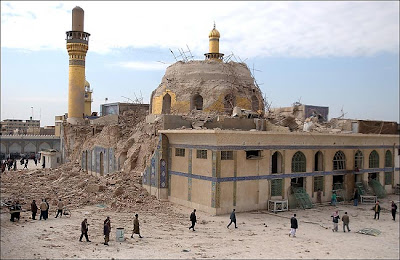 It is symptomatic of the chaos in Iraq that tasks large and small are seldom completed. But in a pungently symbolic exception to that rule, the two minarets at the revered Golden Dome in Samarra were blown up today in a repeat of the bombing there that ushered in the still-raging civil war.

Initial reports stated that insurgents, possibly Al Qaeda elements that had recently moved into the area, planted explosives around the minarets following a firefight with the ineffectual Iraqi National Police who guard the shrine, known as the Shiite Askariya Mosque.

But there are indications that the blasts were an inside job and the cordon around the shrine was dropped in order to give the bombers access.

While the shrine is Shiite, Samarra is predominately Sunni. It was Sunni insurgents who took credit for the February 2006 blast at the Golden Dome that kicked long festering sectarian divisions into high gear.

"First, I don't expect that the impact will be as great this time. When the mosque was hit the first time, it turned a simmering low-grade 'cold' ethnic war into a hot one. There was a palpable sense of crossing a Rubicon, of not being able to go back . . . The context now is entirely different - those dogs have long since been on rampage, and the feel now is one of another atrocity among many. If anything, it demonstrates the inability of the government and the to provide security even when such an attack was both expected and feared. That makes it a blow to Maliki and the , but not the same kind of galvanizing event that the first attack became.

"Second, I suspect (but can't prove right now) that the attack is tied to the various efforts to forge a cross-sectarian opposition front perhaps getting closer to fruition behind the scenes. The Sadrists, the Allawi people, some of the Sunni insurgent groups, Sunni political leaders - they've all been floating publicly and talking privately (I'm told) about various possibilities for an anti-Maliki and anti-U.S. front. . . . Not that such a coalition has seemed very likely, but perhaps enough was happening behind the scenes to make it worth attacking for the sectarians and the al-Qaeda types."

More here on the bombing.

NEEDED: ANOTHER SURGE
General Martin Dempsey says that Iraq needs at least 50,000 more soldiers and policemen than the U.S. had previously estimated, prompting Spencer Ackerman to observe at TPM Muckraker:

"As Donald Rumsfeld famously wrote in a different context, 'the harder we work, the behinder we get.' That could sum up the message given by the general formerly in charge of training Iraqi security forces to a House Armed Services Committee panel yesterday."