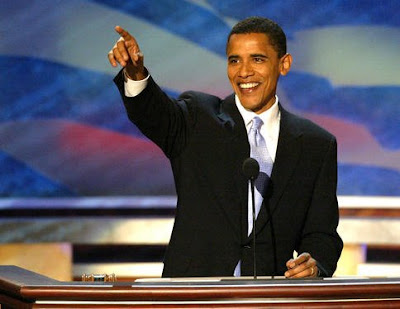 Barack Obama and John Edwards, it should be said, are spectacularly good at giving speeches. One thing American politics has lacked since, well, Bill Clinton, is a truly effective rhetorician. Edwards was good in 2004, but not this good. And while Dean's clipped, aggressive delivery was exciting, his oratory isn't going to land in the history books. But at this point in the race, both Edwards and Obama have proven themselves repeatedly able to speak of progressivism, in their own ways, with astonishing force and eloquence. Weaker speakers tend to fall back on easier topics, like their records, or their opponent's weaknesses. Edwards and Obama sell their ideologies. It's a real difference, and entirely a function of their oratorical talents. For those who believe that Reagan's skills as a communicator proved a president's rhetoric can significantly alter the ideological direction of the country, Edwards and Obama both offer slightly different, but nevertheless completely plausible, models for how a liberal politician could do the same.

The "Issues" page of Rudy Giuliani's website totals 778 words, headings included. Mitt Romney offers only a single sentence about his plans for health care -- after having actually implemented systemic reform as governor. The major candidates' ideas on national security rarely seem to rise above guttural caveman utterances. And so on.

Pondering the astonishing vacuousness of the GOP presidential campaigns.

Rudy Giuliani has made his actions on 9/11 the centerpiece of his campaign for the presidency – if not outwardly then certainly by implication. And there is no doubt that his performance that day was magnificent – for the most part.

But what he did prior to 9/11 and after may prove a little more problematic for Rudy:

Questions that were arguably glossed over by the 9/11 Commission, about the communications snafus that led to so many firefighters losing their lives, as well as a perceived lack of compassion for workers cleaning up Ground Zero will dog his campaign and actually be used against him by his opponents. . . . Instead of a positive, 9/11 could end up as a millstone around his neck, dragging him down to defeat.

If I were advising Senator Clinton on what to say about , this would be it: "Our troops have fought courageously and with great skill against the totalitarian, genocidal Saddam Hussein regime and its security forces. They did their job, but the Bush administration did not do its. . . . That is why I favor getting our troops out of and insisting that regional powers, NATO and the UN now come in to bring about a political resolution, even as the world ensures that a nonsectarian Iraqi military is trained, equipped and deployed for the protection of all Iraqis."

Let’s get real: What are the odds that the voters of would choose, as their next president, a pint-sized, twice-divorced Jewish billionaire New Yorker who touts gay marriage and gun control, and who not only admits to having smoked weed, but says he liked it?

Let’s take it from the top: if the Republicans have got a guy who wants to spend money building a wall against , that’s intellectual vibrancy. If the Democrats get someone who wants to expand health insurance or combat global warming, that’s a canary dying in the coalmine of the Democratic party’s political extremism?

It’s a nice illustration of a dilemma for Democrats. The only way they can get credit for ‘having ideas’ is by turning Republican – not because the Republicans have ideas, but because the range of media-acceptable impulses you can exhibit runs the gamut from the far right to the right-leaning left.

Ralph Nader says he is seriously considering running for president in 2008 because he foresees another Tweedledum-Tweedledee election that offers little real choice to voters.

"You know the two parties are still converging — they don’t even debate the military budget anymore," Nader said . . . "I really think there needs to be more competition from outside the two parties."

I don't agree with a lot of the philosophy of the Dems. I tend to believe in lower taxes and that government is not the solution to every problem. When I decided to become a Republican, I did so after a lot of reading and thinking. I wasn't attracted to the hard-right ideologies being spewed, but I was interested in an older version that was still being found in groups like Republicans for Environmental Protection and Log Cabin Republicans.

This is why I stay with the GOP: to be a reminder of things past and a hope that it will be again.

I am a black, gay moderate Republican that chooses to be who he is.

And if you can't accept that, too bad.

Sometimes it’s hard to tell, when our old buddy Bob Novak scuttlebutts, whether he’s been interacting with actual people or talking to his fist like Señor Wences. And then, if there’s good reason to believe he’s not winging it on his own, you have to figure out if he’s sharing legitimate insider analyses or just passing on Karl Rove’s latest crateful of fat red herring to hapless readers. That’s what makes him fun to peruse.

If we got no-bullshit Bob in his latest political newsletter, then Republicans are in for an even more miserable 2008.