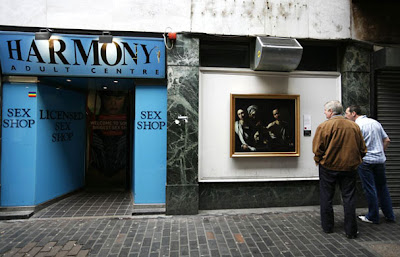 The fog of war seems to have closed back in.

The lack of a veto-proof majority is irrelevant. Congress appropriates funds. No funds, no policy. It takes affirmative action to continue a war. Congress has stood up to be counted, and they have said let's have some more war. Veto-proof majorities are very rare. If that's what you're looking forward to, you had better be prepared for a long wait.

Incredibly, it has been 707 days since President Bush first declared that, "As Iraqis Stand Up, We Will Stand Down."

Harry Reid is a horse's ass.

-- SHAUN MULLEN
Too bad that, in the fullness of time, perfectly good rhetoric comes to be overtaken by events. Nevermore will we hear the ringing phrase "Wait till all the troops are in place at least, damn you!" when the administration’s duly authorized speaking orifices talk about that long-term surge that is not an escalation.

What people are talking about in is not whether the invasion of was legally or morally justified but why it went so disastrously wrong and whether the same blundering fanatics will launch another catastrophic military adventure, most likely a bombing campaign against , to distract attention from failure in .

It's time to start thinking cold-bloodedly about what we might yet eke out of .

Hamas was the popularly elected government in the Gaza Strip. It reflects the will of the Palestinian people. For those who fantasize about a great silent majority in that part of the world hungering for peace, the events of this week should provide a needed reality check.

The families of those murdered at Virginia Tech, who must endure the unendurable, deserve only kindness and consideration. But their demand to be included on the independent panel reviewing the killings and the performance of state agencies is ill-advised. Gov. Timothy M. Kaine is right to reject the request in the interest of a dispassionate and impartial investigation.

An internal FBI audit has found that the bureau potentially violated the law or agency rules more than 1,000 times while collecting data about domestic phone calls, e-mails and financial transactions in recent years, far more than was documented in a Justice Department report in March that ignited bipartisan congressional criticism.

Mars was once a blue planet, a team of Canadian and American scientists have found, with a third of its surface covered by ancient seas.

A new low: judging a candidate by the frequency with which he attends church. One Christianist even demands to know if Fred Thompson has "Taught a Bible class, Presided at the Lord's table, Served as a greeter, Or led singing." Hey, this is today's GOP.

Republican politicians in general have failed to enact the Republican agenda. That’s not an identity crisis — it’s a competency crisis. We’re looking for Republicans who mean what they say — and when we find them, we will find plenty of reason for optimism.

Political science types have always told us that the "iron triangle" is congressional committees, corporations, and lobbyists. Today it's polls, the media, and bias.

As someone who lived under communism for most of his life, I feel obliged to say that I see the biggest threat to freedom, democracy, the market economy and prosperity now in ambitious environmentalism, not in communism. This ideology wants to replace the free and spontaneous evolution of mankind by a sort of central (now global) planning.

Scientists have criticised a major review of the world's remaining oil reserves, warning that the end of oil is coming sooner than governments and oil companies are prepared to admit.

Deconstructing Michael Moore is difficult because his heart is usually in the right place, but his judgment and journalistic ethics are off on some other planet. Documentaries are journalism, not audio-visual polemics, and he has erased the line between them.

There is the yelp, an electronic yodel that grabs attention at intersections or kicks off chases. There is the wail, more traditional; it sounds like the windup police sirens of yore. There is the “ hi-lo,” dubbed the “European” siren by some, because it evokes the police chases seen — and heard — in French and Italian films. The air-horn siren works well, officers say, for clearing intersections of pedestrians and getting the attention of speeding drivers. And the fast, or priority, siren sounds like an asteroid blaster from an old video game, and feels like a jackhammer assault on the ears.

I still see fat acceptance as its own thing, and I’m going to keep calling it that, for a couple of reasons.

It may be too early to begin a death watch, but there’s more bad news ahead for ’s once-invincible auto show. Porsche will not have a display at the North American International Auto Show next January. Don’t worry, , you’ll always have winter.

Attorney General Alberto Gonzales is under investigation by his own department's inspector general and Office of Professional Responsibility.

Embattled Attorney General Alberto Gonzales' future was thrown further into jeopardy Friday when he was accidentally struck by a boom microphone, reversing a years-long case of amnesia and causing him to remember his true identity as hotshot Tulsa pool and spa salesman "Cabana Al" Gonzales.

Photograph by David Levene/The Guardian
Posted by Shaun Mullen at 5:00 AM
Email ThisBlogThis!Share to TwitterShare to FacebookShare to Pinterest