The Poconos: From Paradise to Sweatshops 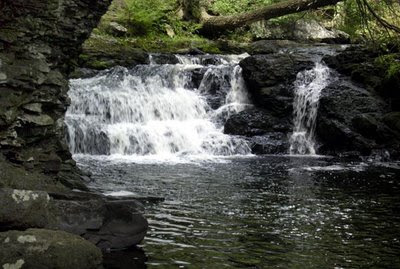 Two faces of the Poconos: A waterfall and a sweatshop
Think of the Poconos of Northeastern Pennsylvania and you probably visualize forests thick with hemlock, spruce and deer, ski slopes, golf courses and honeymoon hotels with heart-shaped bathtubs. To which you can now add sweatshops where illegal immigrants toil.

The arrest of 81 alleged illegals in an early-morning raid by federal immigration agents at Iridium Industries in East Stroudsburg on June 19 has led to revelations that not only was it widely known that the company was well aware that most of its workers were illegals, but as many as 30 other area companies are now under investigation for doing the same thing.

This, I believe, is what is known as an open secret.

And further evidence that the Poconos, which is near and dear to my heart, has become just another place with runaway development, staggering numbers of home foreclosures, grinding poverty, soaring crime, failing schools, a stressed out infrastructure and a magnet for businesses that know they can get away with pretty much anything.

While we’re heaping on the scorn, let’s reserve a large dollop for the public officials who have aided and abetted in the decline of the Poconos while feathering their own nests. These officials not only must have known about the sweatshops, but in the case of Iridium Industries ponied up $9 million in taxpayer funded grants and loans to underwrite its growth on the promise that it would hire local residents, presumably legal.

And four special dollops of scorn:

A dollop for State Representative Mario Scavello, who sang the praises of Iridium but was uncurious about how that $9 million was being put to use. Scavello has now called for a "full state investigation" of a scandal that he aided and abetted.

I have an idea: When that probe is completed, let's investigate who has been financing Mister Mario's political campaigns.

A dollop each for Donna Asure and Bob Nothstein, two commissioners who are reliably AWOL whenever leadership is needed to deal with the Poconos' myriad problems.

Asure’s anything but assuring response to the sweatshop revelations was to put her head where the sun don’t shine and say that she was going to "wait and see" if the allegations are true. The reliably snarky Nothstein, who has morphed from being a semi-idealistic young lawyer to a cynical operator without peer in local politics, has the temerity to say the scandal is none of the commissioners' busyness. (An update: Read the message in the comments section below this article from the third commissioner, who says she warned Asure and Northstein of what was really going on at Iridium.)

I have an idea: How about a recall campaign to throw these leadership-averse bums out of office?

And another dollop for that unctuous preserver of the Poconos’ false front -- Bob Uguccioni, executive director of the Pocono Mountains Visitors Bureau – who in a panic sent an email to its members warning of the expanding probe but has not uttered a word in public, to my knowledge, to condemn the sweatshop operators.

I have an idea: Let's throw a party for Big Bob. A retirement party. And then find a replacement who has the Poconos' best interests in mind, not his own and those of his pals.

And while we're at it, a large dollop of praise for the Pocono Record, the region’s only newspaper of consequence. The paper, called the Wretched by long suffering readers, has been a deserving target of scorn at this blog in the past, but has aggressively covered the sweatshop scandal and other recent UAIs (Uguccioni Averse Issues) that once wouldn't have gotten a peep.

I have an idea: If you're a reader, let Jim Maxwell and Bill Watson know how much you appreciate the job they're doing in turning around this fusty old gal. You can call give them a ringie dingie at 570-421-3000.

Finally, there is the tragic case of one of the thousands of people who move to the Poconos each year because they see it as a place to get ahead.

Francisco Antonio Romero Cancino was crushed by a huge slab of granite at All Granite and Marble in Stroudsburg last December 6.

The company was fined by the Occupational Safety and Health Administration for several safety violations, including not requiring its workers to wear hard hats and not properly training them.

As in punch the time clock and get to work, Gringo, because you're expendable.

Cancino hoped to better support his children —the youngest is one year old — back in , and perhaps save enough money to buy land to build a retirement home.

But Cancino found not the American Dream but the Poconos Reality.

As Uguccioni’s website boasts, "The Pocono Mountains offer four seasons of endless fun and a tremendous variety of diversions."

Sadly, that's no longer the half of it.

Bottom photo by David Kidwell/Pocono Record via AP
Posted by Shaun Mullen at 5:21 AM
Email ThisBlogThis!Share to TwitterShare to FacebookShare to Pinterest

I enjoyed your article on your excellent blog. By the way, when the loan hit the papers after the TEFRA hearing I received a phone call from a girlfriend who had worked there and she filled me in on the real deal. Because I believed her and wanted time to further investigate, I would not sign any of the papers for the County’s part in this; however it needed only two signatures to go forward. I did tell the others why I wouldn’t sign and basically was not believed. I then spoke to other women who came forward and knew there was a real problem at that worksite.

This was supposed to create jobs in Monroe County! I want to have Monroe County residents get Monroe County jobs. It’s as simple as that. Because even the legal residents were treated so horribly, I learned that the company had a very high turnover rate. I learned enough to understand why Americans need union protection, especially from business owners who are foreign nationals and know how to exploit workers legal and illegal for monetary gain.

By the way I called a friend of mine in the Attorney General’s office for advice and he suggested I speak to someone in Labor and Industry. I next called John Casella at our local Career Link, and I assumed he pursued it. I didn’t hear or know anything more until I heard that the raid took place. I was glad that it did. I hope it will make all local businesses learn to follow the rules, hire legally, and treat all workers with dignity and respect. It’s as simple as that. I try to do the right thing, not the popular thing. I’m a retired educator. I’m doing this job for public service, not monetary gain, and I don’t care if I ever get elected again!