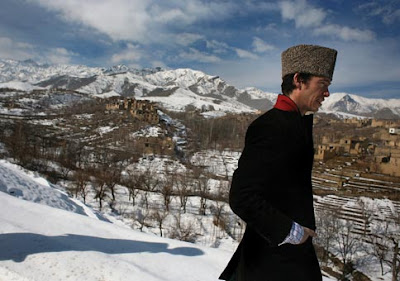 If you're into the concept of national sovereignty, central governments and all that kind of stuff, then is a seriously beautiful but broken place.

I happen to believe strongly that is, in fact, ungovernable, as a succession of foreign occupiers have learned to their dismay.

But that doesn't mean that the culture and history of this wild place should not be preserved, and that's where Rory Stewart enters the big picture.

Stewart, a fearless (or fearlessly insane) Scotsman, walked the 600 miles of Afghanistan from western to eastern border to border alone in 2002 not long after the U.S.-led invasion repelled the Taliban. (Okay, Stewart had the company of a dog for much of the trek, but you don’t want to know what happened to it.)

It should go without saying that Stewart fell in love with and has started a foundation to help save Old Kabul.

Click here for a National Geographic Adventure story on his efforts and here for a photo essay.

Photograph by Aaron Huey
Posted by Shaun Mullen at 5:19 AM
Email ThisBlogThis!Share to TwitterShare to FacebookShare to Pinterest