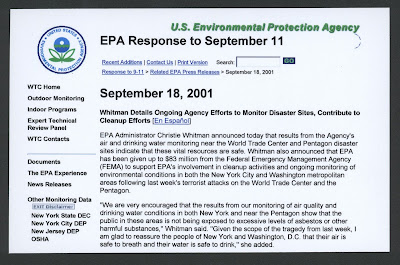 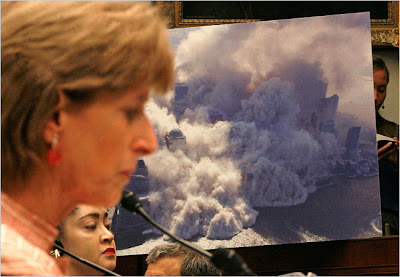 EXHIBIT A (TOP) AND PREVARICATOR B

On September 11, 2001, two hijacked jet aircraft crashed into the , killing 2,600 people and destroying the twin towers. But there has been a second catastrophe, as well: Extremely high rates of deadly respiratory disease among rescue workers and others who toiled in clouds of toxic dust at Ground Zero that officials claimed was not dangerous to breathe.

Chief among those officials was Christie Todd Whitman, a former governor and a rising national Republican star until she was cast out of the GOP temple by the conservative priests.

As administrator of the Environmental Protection Agency, Whitman asserted in a September 18, 2001, press release, one of many altered by the White House to present a more upbeat picture, that:

"We are very encouraged that the results from our monitoring of air quality and drinking water conditions in both and near the Pentagon show that the public in these areas is not being exposed to excessive levels of asbestos or other harmful substances. Given the scope of the tragedy from last week, I am glad to reassure the people of and that their air is safe to breath and their water is safe to drink."

As official lies go, this was a whopper because the White House, Whitman and other environmental and health officials suspected and later were made well aware that there were an array of toxins at Ground Zero and in the surrounding area from the impact of the jetliners and collapse of the towers. These included minute shards of glass and asbestos, PCBs and other poisons.

The findings of a study that involved extensive medical and psychological examinations of 20,000 Ground Zero responders and clean-up workers released last September by provides a stunning backdrop to Whitman’s duplicity:

* Among the responders who had no symptoms before 9/11, 61 percent developed respiratory symptoms while working at the site.

* One-third of Ground Zero workers showed diminished lung capacity. Among nonsmokers, 28 percent had some breathing impairment, more than double the rate for nonsmokers in the general population.

* Many respiratory ailments such as sinusitis, asthma and related gastrointestinal problems have persisted or grown worse in the years since 9/11.

* Most of the workers who said they experienced respiratory problems at Ground Zero were still having those problems up to two and a half years later, an indication that the illnesses were becoming chronic.

* Workers were found to have a number of different ailments caused by their work, including upper respiratory illnesses (87 percent) such as sinusitis, laryngitis, and vocal cord dysfunction, lower respiratory disorders (47 percent) such as asthma and a condition known as World Trade Center cough, psychological disorders (37 percent) such as post-traumatic stress disorder and chronic depression, and musculoskeletal problems (31 percent) often from injuries that occurred while working at Ground Zero.

One worker has died from respiratory problems and many more, perhaps thousands, are expected to have significantly shorter lifespans.

Whitman, who was forced out of her EPA job because she was too moderate for the anti-environment Bush administration, initially refused to testify before a House judiciary subcommittee about her post-9/11 statements before finally agreeing to appear yesterday.

At no time during her tenure as the nation's top environmental watchdog did she ever question the White House's stage management of her.

Whitman has been named in at least three pending lawsuits brought against the EPA by New York City residents and Ground Zero workers. The controversy over the health issues has led to questions about presidential wannabe Rudy Giuliani’s handling of worker safety as New York City mayor, notably his failure to require workers at the clean-up site to wear respirators.

The House hearing room was packed with clean-up workers and residents who said they had waited years for Whitman to answer questions about environmental and health issues.

She claimed that the September 18 press release and other declarations that everything was copescetic were directed at residents of the neighborhood around the WTC, not the workers. And she tried to shift blame by stating that she was only acting on information from experts:

"I fully appreciate that the events of 9/11 touched raw emotions, but I am disappointed at the misinformation, innuendo and outright falsehoods that have characterized the public discussion. . . .

"It's utterly false then for EPA critics to assert that I or others at the agency set about to mislead New Yorkers and rescue workers. Every statement I made was based on what experts, who had a great deal of experience in these things, conveyed to me."

Representative Jerrold Nadler, the subcommittee chairman and a Manhattan Democrat whose district includes Ground Zero, was having none of that:

"Our government has knowingly exposed thousands of American citizens unnecessarily to deadly hazardous materials. And because it has never admitted the truth, Americans remain at grave risk to this day."

The cover-up of Ground Zero hazards extended well beyond the EPA and included state and city health agencies.

Then, in 2003 the EPA’s own inspector general concluded that Whitman did not have sufficient scientific information to state that the air was safe to breath and noted that the White House had altered her press releases.

In a September 13, 2001 press release, the EPA declared that air quality near the still-burning rubble at Ground Zero was "unlikely to cause significant health effects."

In a September 16, 2003, press release, the EPA declared that asbestos levels "cause us no concern."

In one EPA draft, a reference to asbestos levels in some areas being three times higher than national standards was changed to "slightly above the 1 percent trigger for defining asbestos material."

"Those quotes were unambiguous; they were reassuring and they were dead wrong. They were literally dead wrong."

Whitman's Republican compadres on the subcommittee were for the most part silent.

In response to sharp questioning, Whitman claimed that she was aware of only one instance in which important information was removed from one of her public statements by the President’s inaptly named Council on Environmental Quality, which edited all of her pronouncements in the aftermath of the attack.

The New York Times said that:

"In one draft release in September (2001), Mrs. Whitman urged residents whose apartments had been contaminated to consider having them professionally cleaned. After the statement was sent to the White House for review, the phrase about professional cleaning was removed."

She explained that early on a decision had been made by the White House that all public statements be coordinated so that the federal government could be seen as speaking with one voice.


This assertion that drew an angry response from Representative Bill Pascrell, a New Jersey Democrat:

* * * * *
Click here for Christine Whitman and The Truth, an alternative and considerably more positive take on Whitman and her testimony by my coblogging associate Pete Abel at The Moderate Voice, where my article was crossposted.

I just got an email from Michael S. Selvaggi, Esquire, a senior partner in the elite New Jersey law firm that first told Ms. Whitman that she should refuse to testify and then helped prep her for her appearance before the subcommittee.

Hey Giuditta! Could you tell your left wing wacko Democrats to take me off their mailing list....

I guess even $500 an hour doesn't get you decent legal representation any more.

"At no time during her tenure as the nation's top environmental watchdog did she ever question the White House's stage management of her."

But later, in her 2005 book, she did make it clear that she had strong differences of opinion with the Administration, and disagreed with some of the changes in actual policy vs. campaign promises.

On a separate note, thanks to Shaun for linking to my alternative view at TMV. I do sincerely Gov. Whitman is one of the good people, someone who did the best she could in a difficult situation.

And that you, too, Pete.

Our Missy Christy has claimed she resigned due to CHENEY's finger in her EPA pie....

In a groundbreaking article today by the Washington Post, the paper alleges that Whitman left the Administration because they pressured her to accept pro-industry coal power plant rules which threatened ghoulish levels of air pollution.....

Whitman told the Post she'd "been stunned by what she viewed as an unquestioned belief that EPA's regulations were primarily to blame for keeping companies from building new power plants."

"I was upset, mad, offended that there seemed to be so much head-nodding around the table," she said. She said she had to fight "tooth and nail" to keep Cheney from turning over the rewriting of the rules to the Energy Department.

Whitman says she wanted a return to Bush's "Clear Skies" initiative, but that went nowhere.

Whitman brought two folders to show President Bush. The first was 2 1/2 inches thick, detailing the dangers of raising legal levels of arsenic in drinking water -- another Administration proposal. She pointed to a folder she'd brought "four or five times as thick."

"If you think arsenic was bad," she recalled telling Bush, "look at what has already been written about this."

Nothing changed. After the EPA rewrote the coal power plant standards, the White House essentially rewrote the rules to favor industry. Whitman said she'd had enough.

"I just couldn't sign it," she told the Post. "The president has a right to have an administrator who could defend it, and I just couldn't."

Soon thereafter, a federal appeals court found that the rule change violated the Clean Air Act -- according to the paper, the judges said the administration had redefined the law in a way that could be valid "only in a Humpty-Dumpty world."

So much for the GOP's mantra to resign IN SILENCE....so they can spend time with their families they adroitly avoided doing all those years before.

I'm sorry, Pete, this woman let stand that the air around the WTC was safe to breath. In the interest of protecting the heroes that worked over that broken site they should have been explicitly warned.
And that Cheney got to continuously out-slick her, where the health of the nation and the world were being damaged? She should have blabbed to every news organization in the country! Political suicide? Tough sh*t. Public safety isn't about career building.

there's the old saying..
'the only person fit to hold power is one who doesn't want it'
Of course she is utterly contrary to this.
It has to be a very enticing and seductive energy standing in the halls of power.
But for her failings she will have to
try to sleep in the dead of the night
knowing that she's a grand scale liar and a traitor to the best of her own people.