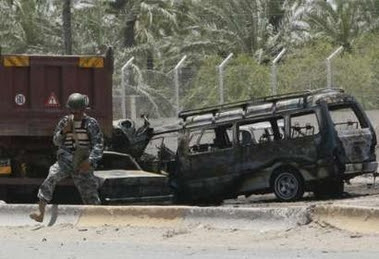 It has been obvious for some time that political realities have overtaken military realities in .

In one of the most stupid miscalculations of the many the Bush administration has made since it decided to invade Iraq, back in March at the height of its showdown with Congress over war funding, the White House said that the surge needed six months to take hold and succeed and everything would be in apple-pie order by then.

That, of course, was exceedingly shortsighted, as well as arrogant, because September will come and go with the situation on the ground no different, except possibly worse. And, yes, I am factoring in the big offensive that kicked off over the weekend.

The Talk, a blog at the WaPo, reports:

"Gen. David H. Petraeus, the commander of U.S. forces in Iraq, said he does not expect the 'surge' of 30,000 additional troops to Iraq to finish their job by September, a critical month when lawmakers expect a clear read on whether the larger troop presence is having an effect.

"Fox News Host Chris Wallace asked Petraeus, 'You surely don’t think the job would be done by the surge by September?'

I have a great deal of respect for Petraeus, but he was being disingenuous in blaming the lack of progress to the sectarian violence that preceded the surge.

The violence during that period was unremarkable in that it was just more of the same, and is the very reason why the surge was taking place. Things will be no different in September because there were never enough troops in the first place and an additional 30,000 boots simply aren’t enough to make a difference.

I also have a great deal of anger for the Bush administration for foisting the September deadline on Petraeus and his troops, who are doing their best under onerous circumstances in a war that was lost long ago.