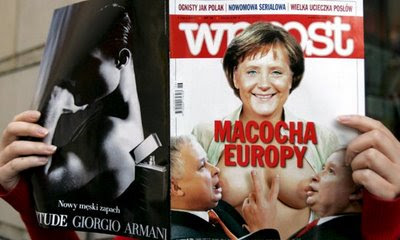 The image appears on the cover of the Polish weekly Wprost, and is titled "Stepmother of Europe".

A Polish council overseeing ethics in the media said the montage overstepped "the limits of good taste".

Social Democrat Markus Meckel, head of the German-Polish parliamentary group, said: "It is quite unbelievable. has lost so many friends over the past weeks and months. It should really think hard in the future about how it hopes to win them back."

For everyone who is slavering with anticipation at the debut of the shiny new Apple iPhone, keep this in mind: If you buy one of those admittedly slick new devices, you’re essentially subsidizing efforts to violate your privacy and restrict your ability to use the Internet freely.

Science defines mutualism, one form of symbiosis, as “an interaction between two or more species, where both derive benefit.” Think bees and flowers.

In putting the relationship of Ann Coulter and John Edwards under the microscope, another example seems more apt: the birds that eat parasites off crocodiles and are in turn protected from predators by their hosts’ giant jaws.

The gnashing of Coulter’s mandibles against him have not only nourished her notoriety (and lecture fees) but served as a fund-raising boon for Edwards.

Yikes! Who knew that academic journals published this sort of thing? Tara C. Smith, over at Aetiology, tells of a forthcoming paper in the journal Clinical Infectious Diseases that illustrates all too clearly the price some women pay for beauty.

Or for their conceptions of beauty — a hairless pubic area. Another blogger wonders about the appeal.

The woman described in this case report endured the agony of swelling and infections (both viral and bacterial) that could have killed her, following a bikini wax.

In a case of life imitating art, researchers at the Massachusetts Institute of Technology (M.I.T.) reported today that they had successfully reversed mental retardation in mice, just as scientists did in the classic 1966 novel Flowers for Algernon. In the book by Daniel Keyes, scientists use experimental surgery—first tested on a mouse named Algernon—to dramatically boost the intelligence of a mentally retarded janitor named Charlie Gordon. Now M.I.T. scientists report in Proceedings of the National Academy of the Sciences USA that they ameliorated brain damage in mice caused by a genetic disorder known as fragile X syndrome by blocking an enzyme involved in cellular development.

Russian President Vladimir Putin is making an astonishing bid to grab a vast chunk of the - so he can tap its vast potential oil, gas and mineral wealth.

His scientists claim an underwater ridge near the North Pole is really part of 's continental shelf.

Robin Williams refused to apologize for jokes he made about priests and pedophiles that has the Catholic Church "up in arms."

He had made the jokes earlier this week on the "Tonight Show" with Jay Leno, where he was appearing to promote his new movie, "License to Wed," in which he plays an Episcopal priest in Chicago who runs a unique marriage preparation course.