A Father's Day Tribute to Joe 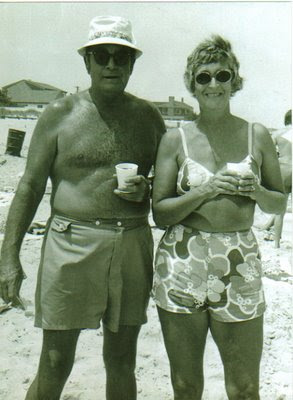 JOE AND JANE AT THEIR BELOVED SEASHORE

I was just saying the other day that I learned much from my father because of what he didn't say. As is typical of many members of the so-called Greatest Generation, he was deeply modest, endeavored to take the many setbacks that life handed him in stride, did not waste words . . . or abide fools gladly.

Joseph Daniel Mullen was born into a dirt poor Irish immigrant family in 1923. His father died in a shipyard accident when he was three and his oldest sister had to drop out of school and go to work at age 14 to put food on the table when the Great Depression set in.

Joe caught his first big break when his older brother received a full ride to the state university in the form of a football scholarship. If anything, my father was even more talented athletically, and a champion marbles shooter to boot. He was about to become the second member of the family to go to university when his athletic career was shattered by a life-threatening injury in the last game of his senior high school career.

No university for Joe, so he got a job as a lab assistant at a local chemical company, rising through the ranks to become a safety engineer but never given his full due as an executive because unlike the PhD chemists with whom he worked, he didn’t have that coveted college degree.

Joe did the safety engineer thing to the hilt. We were the first family in our neighborhood to have car seat belts, fire extinguishers in kitchen and garage and smoke detectors. During National Highway Safety Month, he would drive around in his second-hand Plymouth Fury convertible with the top down and a full replica human skeleton riding shotgun.

At home, my siblings and I got everything that he and my mother had never had.

But we were expected to work summer jobs and pay for as much of our college as possible. We were late getting a TV, but the house was full of books and newspapers, and heaping dish of (liberal Democratic) politics was served at most meals.

My father was raised a Roman Catholic, but fell in love with my mother, whose father was a Jew, while working as a lifeguard. So a church wedding was out. He never forgave the church for its willful discrimination, but we were raised to respect everyone regardless of their skin color, religion or sexual orientation.

Perhaps the major material accomplishment of his life was to build a backyard in-ground swimming pool with surplus materials. (But no diving board; too dangerous for Mr. Safety Engineer.)

The pool parties that he and my mother threw were legendary. These get-togethers also got them in beaucoup trouble with some of their so-called friends, who stopped coming around because the guests included a black couple and two openly gay men.

The twilight of Joe’s life should have been a happy one. Surf fishing and just hanging out at their beloved seashore.

But a major cigarette habit caught up with him as he turned 60 and he died two years later of lung cancer. Although not before making a grandfather clock that sits next to me as I write this and will be handed down to my son some day.

If my father had faults, it was a fondness for bad jokes and stupid limericks. And, as noted, cigarettes.

He has been gone for over 25 years now, but his handsome looks, warm smile, deep love for my mother and his encouraging words – gently admonishing me to not just do better, but to be the best – will forever loom large.

And I'm sure he would be proud of you.

Well said tribute. The name caught my eye - my father, Joe, is still with us - 87 years old, a WWII vet (Pacific) and one of the only people I know who is further off to the left than his daughter. Who says you get more conservative with age. I've learned much from this man.

My Joe was toward the left, but always in sight of center.

May your Joe have a happy Father's Day.

Nice little tribute - and I'm sure that like him, your tribute's deepest meanings and message remain those things not said.