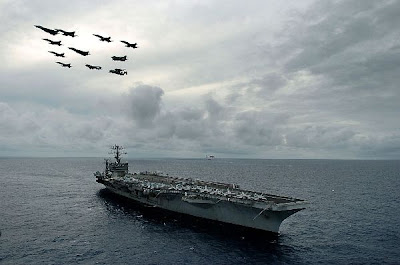 I thought that I was experienced enough and sage enough that I was correct in my view that rumors the Bush administration was considering military strikes against ’s nuculur . . ., er, nuclear facilities could not be taken seriously. But it turns out that the Crew Without a Clue is indeed considering that bit of profound wignuttery.

There have been a flurry of stories that the White House was flirting with attacking Iran, most recently a front-page New York Times article based on a Niagara of leaks to the effect that Vice President Cheney has been let out of the cellar and is advocating the strikes. (Secretary of State Rice is said to be against them.)

Don’t get me wrong. is bad ju jus. The malevolent hand of President Mahmoud Ahmadinejad's regime can be seen in practically everything that is screwed up in the region from to to . Oh, and , too. But the notion that the path to setting the most troubled region in the world to rights is through military action against Iran is in-freaking-sane.

* It can be argued that ’s care and feeding of insurgencies in the aforementioned countries is a gross provocation. But with the U.S. similarly bankrolling and arming its own pet groups, including some in Iraq, Washington loses (pardon the term) the moral high ground and it is difficult to argue that Tehran’s provocations rise to the level of acts of war. A strike would most certainly be one.

* An attack on ’s fledgling nuclear infrastructure would be in the form of cruise missiles from warships and submarines and a variety of bombs delivered by aircraft, including so-called bunker busters. You know, that good old “shock and awe.” But as was the case at the outset of the Iraq war, a massive strike delivered with overwhelming force against a weak enemy looks good on paper but does not guarantee tactically satisfactory results. Most of Iran's nuclear facilities are well underground and cannot necessarily be taken out with the most heavy-duty munitions.

* Then there is the matter of intelligence -- or lack of. The manifold intelligence failues leading up to Iraq, compounded by the White House's political agenda, is legendary. Why are things suddenly going to be very different with Iran?

In the end, there are just too many unknowns for comfort here. That is chiefly because of the instability of both regimes:

Iran is imploding because of a variety of factors, but chief among them is Mahmoud Ahmadinejad’s squandered mandate. I do not believe that the ayatollahs want war, but it may just be what this president needs to retain his grip on power.

The Bush administration is imploding because of a variety of factors, chief among them George Bush's squandered mandate. Are things so wacked out that Cheney (backed by John McCain and most Republican presidential wannabes) can demand strikes because it may be just what this president needs to retain his grip on power?

I can hear the Oval Office conversation now:

"Okay, Mr. President. You won't pardon Scooter, so you owe me a big one."

"Of course Mr. President. But isn't that what you need?

"To divert attention from Iraq."

Your comment about the high moral ground is exactly correct. There was a time when the world would assume that our actions must be justified simply because we were the USA. Now, just the opposite is true. Anything we do is suspect.

What worries me the most is that, if the George and Dick show do decide to go on the road in Iran, the American public will not do anything to stop them....again. They will buy whatever spin is put on it to scare them and we will be in Iran which I think could be far worse than Iraq. Nice post.

Shaun, I've been posting for years now in opposition to military strikes against Iran but with this

It's easy to make the case that any number of Tehran's actions over the last 30 years have been acts of war. It's harder to argue that they're acts of war we should actually go to war over.

There's something I'm curious about. The Bush Administration has said that they're opposed to attacking Iran. The article you cited says that Condoleezza Rice opposes attacking Iran while Dick Cheney supports it. How does that triangulate to the administration favoring an attack on Iran?

Please note that I did not say that the Bush administration favors an attack. I said that it is considering an attack, which the veep favors and Rice does not.

Howcum? it is not understandable to many Iranians the war rehetoric of the Neocons in the Washington. It is in favor of hardliners in Tehran and in the region. Then they can rally the people behind the flag and reinforce the anti-americanism rhetoric....consider what is happening in the Middle East, especially in Palestine, Iraq and Syria, nobody would be able to control the consequences...