Iraq: The Devil Is in the Details 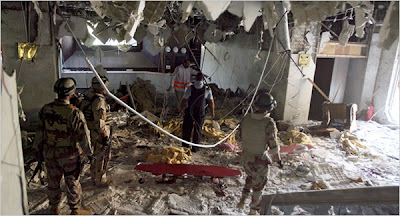 Meeting of sheiks at a Baghdad hotel was a blast. More here.
Buried deep in a recent New York Times story on troop withdrawals was this mindblower:

"The reality, officials said, is that starting around April the military will simply run out of troops to maintain the current effort. By then, officials said, Mr. Bush would either have to withdraw roughly one brigade a month, or extend the tours of troops now in and shorten their time back home before redeployment. The latter, said one White House official, 'is not something the president wants to do' and would likely become a centerpiece of the 2008 presidential campaign."

Well, yes and no.

Yes because Mess in will indeed loom huge as Democratic candidates run against it and Republicans run from it.

No, because issues like extending troop tours and limiting stateside rotations, which the Pentagon has done repeatedly at the prodding of the White House, have barely registered on the national radar.

It's old news that the Bush administration plays loose and fast with the facts on Iraq, but the latest smoke being blown up the collective American backside is an easy-to-miss shift in nomenclature.

" forces continue to battle Shiite militia in the south as well as Shiite militia and Sunni insurgents in . Yet 's most wanted enemy at the moment is Sunni al Qaida in . The Bush administration's recent shift toward calling the enemy in 'al Qaida' rather than an insurgency may reflect the difficulty in maintaining support for the war at home more than it does the nature of the enemy in ."

Yuppers. Compare that to what the president said in November 2005 when he actually got it right:

"A clear strategy begins with a clear understanding of the enemy we face. The enemy in is a combination of rejectionists, Saddamists and terrorists. The rejectionists are by far the largest group. . . . The second group that makes up the enemy in is smaller, but more determined. … The third group is the smallest, but the most lethal: the terrorists affiliated with or inspired by al Qaeda."

In an interesting example of pretzel logic, Wixted claims at Back Talk that:

"Russ Feingold knows perfectly well that all of the spectacular mass-casualty attacks from that make the news are attacks by al Qaeda. He also knows that those attacks are designed to do precisely what George Bush said they are designed to do (i.e., to re-ignite civil war and demoralize Americans). . . . But Feingold also knows that the Democrats will retain a partisan political advantage so long as Americans don't appreciate these facts. So long as Americans believe that has descended into civil war and that it has nothing to do with the war on terror, they will want to leave."

And if made aware that there isn't a civil war they'll want to send another 100,000 troops.

TAMPING DOWN EXPECTATIONS -- PART 1
As sure as night follows day, the bar gets lowered every time the U.S. goes on the offense in Iraq and the initial lofty pronouncements are adjusted . . . er, to suit the reality. The latest example is Operation Arrowhead Ripper, a part of Operation Phantom Thunder, which is being called the biggest offensive since the opening months of the war.

Commanders and some pundits predicted that there would be a knock-down, drag-out fight between U.S. troops and Al Qaeda insurgents holded up in the city of Baquba in Diyala Province. But as Bill Roggio notes without irony at The Fourth Rail:

" commanders have begun to tamp down expectations of a large fight against Al Qaeda believed to be trapped in the city."

This is because the offensive was telegraphed from the get-go and most of those insurgents knew they had to get out of Dodge. This is a classic maneuver in what less charitable commentators, myself included, are calling the Iraqi version of Whack-a-Mole.

TAMPING DOWN EXPECTATIONS -- PART 2
In refreshing turn of candor, two Arrowhead Ripper commanders say that the operation say it fell short of expectations.

"We are on our way to securing the population of Baquba, which is what we came here to do. I am pretty satisfied, with the exception of my own goal to kill and capture as many as possible so we don’t have to fight them somewhere else."

Says Brigadier General Mick Bednarek of the Iraqi army troops that are to take over when U.S. forces pull out:

"They're not quite up to the job yet."

And, as is beyond obvious, won't ever be up to the job given that the U.S. has been training up the Iraqi Army for three years now.

WHEN NO NEWS IS GOOD NEWS

Figuring out what the heck is happening in Iraq has gotten increasingly difficult as the U.S. and Baghdad government have pretty much turned off the spigot that had been gushing statistics on, among other things, dead Iraqi civilians and Green Zone mortar attacks.

But independent sources estimate that because the surge has been so successful that only 1,100 Iraqi civilians have died so far this month. That is about 45 a day, down from about 65 a day last month.

Photograph by Ahmad Al-Rubaye/AFP- Getty Images
Posted by Shaun Mullen at 5:12 AM
Email ThisBlogThis!Share to TwitterShare to FacebookShare to Pinterest