Barry Bonds: 'The Power & The PHP' 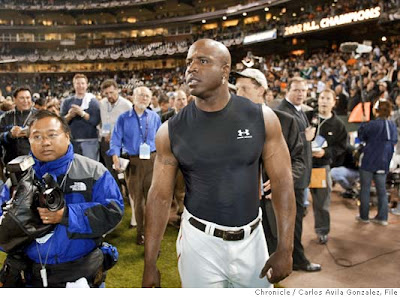 A while back, I weighed in on the controversy surrounding Barry Bonds’ run for the all-time Major League home run record. My musings generated a fair amount of discussion, especially whether there is a racial component to how baseball fans view the San Francisco Giants slugger. (Of course there is.)

Now it’s the turn of Rick Moran, who has penned a terrific piece on the subject at Pajamas Media that is a must-read if you love baseball.

One of the things that make Rick so enjoyable to read, even when he’s beating that dead conservative horse at Rightwing Nuthouse, his own blog, is that he has an eye for detail and nuance. And he knows baseball, so what more do you want?

An excerpt from his piece:

"Major League ballplayers are fully aware of something that is only vaguely understood by fans and the media; that Barry Bonds’ feat in hitting 756 home runs is truly one of the more remarkable athletic accomplishments in history.

"There is no more difficult task in sports than a baseball batter’s attempt to hit a round ball careening toward him from a little more than 60 feet away, inches from his person, at more than 90 miles per hour with a rounded stick of wood weighing on average 34 ounces. The 5 ounce ball of tightly wound horsehide around a plug of cork can be made by the pitcher when thrown to dip, to shoot left or right, to slide, to flutter, or to hop like a scared rabbit.

"As it leaves the pitcher’s hand, the batter has about 2/10 of a second to read the pitch and decide whether to swing the bat or not. In those fractions of a second, the player must decide what kind of pitch is being thrown, how fast it is going to be arriving at home plate, and whether or not the ball will cross home plate for a strike. Being off a couple thousandths of a second means the difference between hitting the ball or not. And the pitcher, God bless him, has other tricks up his sleeve as well. He can change speeds from pitch to pitch to keep the hitter off balance. He can change the angle of his arm when he delivers the ball – coming “over the top” or “dropping down” and slinging the ball almost sidearm. This will change the rotation of the seams against the air between the mound and home plate causing the ball to shoot across the plate while diving downward.

"The ball can also be made to curve so that when leaving the pitcher’s hand, the sphere appears to be making a bee line straight for the batter’s head only to fall harmlessly, knee high, over the outside corner of the pentagon-shaped home plate. The flight of the ball toward the hitter’s noggin initiates the “fight or flee” reflex deep in the primitive medulla oblongata, causing the batter’s rear end to begin to skedaddle and the knees to buckle in anticipation that trying to flee from the white demon would be useless. Meanwhile, 50 million years of cognitive mammalian evolution is screaming at the rump to stay put and swing the damn bat because the pitcher is making you look like an idiot.

The result? A brain cramp that causes the batter to freeze like a side of beef in a meat locker while the ball drops gently over the corner for a called strike. The pitcher tries not to smile too broadly because he knows that the next curve ball he throws may not be so perfect. He may, in fact, make a slight error in the way he delivers the pitch and instead of curving, the ball will hang over the middle of home plate like a ripe plum thigh high, at which point the batter will swing, connect, and send the ball into the next zip code.

Thus be it ever the eternal battle between pitcher and hitter."

Just imagine what it was like in the days before strength-training, strength-training coaches, physical therapy, visualization training, active balls, corked bats and short fences. Pitchers and catchers have always had the advantage of tricks and dirty tricks, especially before the advent of instant replay.

The accomplishment of Henry Aaron was accompanied by a stressful environment of racially motivated antagonism and in spite of the lack of modern medicine. He dealt with all that, and he's a mensch.

Babe Ruth before him was hitting fifty plus when anything over ten made you a slugger. The nearest competitor in the year he hit sixty was something like twenty-eight. He was twice the slugger of anyone in baseball and still he was said to be polite to the press and nice to the fans.