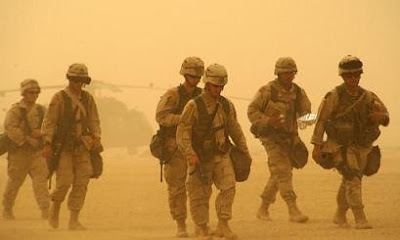 The blogospheric chorus of fervid conservative voices singing that the Iraq war is not lost has fallen silent.

Pro-war commenters at this blog and others have stoutly defended the notion that the war is not lost in the traditional (which it to say military) sense and that the U.S. simply needs to be given more time, more troops, and more so on and so forth.

But the junkyard dog of the reality that the American people are tired of being misled about George Bush's Forever War has gone from nipping at their heels to biting them in their asses.

And as winter turned to spring and now spring is turning to summer, those fervid conservative voices are nowhere to be heard.

Only a few holdout harpies are in the last throes of believing that victory can be plucked from the jaws of . . . well, defeat, to be perfectly honest about it. This despite the reality that:

* The war was poorly planned.

* The enemy was poorly understood.

* The history and sectarian sensitivities of the Iraqi people were not understood at all.

* There were far too few troops.

* There were far too few troops trained in counterinsurgency warfare.

* The occupation was a grab-bag of arrogant ideas and wishful thinking.

* And the whole schlemiel has been a tragic $400 billion exercise in wasted lives and politics before policy, as well as wishful thinking before sound strategy.

The 1968 Tet Offensive was the watershed moment that led to the painfully slow U.S. withdrawal from Vietnam.

(Irony Alert: This was despite the fact that Tet was a military defeat but a propaganda victory for the Viet Cong and NVA. And that the U.S. military has determinedly gone out of its way to ignore the lessons of that dreary conflict and failed to apply them in Iraq until it was much too late. The current offensive against Al Qaeda insurgents being a good example.)

There now has been a watershed moment in Iraq. But I can't quite put my finger on when and why the Conservative Fat Lady sang, although she surely has.

What do you think? (Comments from Anonymice are welcome.)
Posted by Shaun Mullen at 5:43 AM
Email ThisBlogThis!Share to TwitterShare to FacebookShare to Pinterest

I have to be one of those Anonymice because I am on active duty, although home from Iraq. I agree with everything you said, especially about Tet. I think the current offensive will be the watershed because it is too late to make a difference and people will realize that.

As the fat lady sings;
in the rockets' red glare;
who sucks up the blame;
when the flag's no more there?

Somebody has to give the order to abandon Emerald City.
Some Iraqi body is going to be video'd celebrating, flag raising, flag burning and effigy burning as they enter the Palais de Bush hubris. Will it be Sunnis or Shiite Sadrists? God forbid al Quaeda will even have a cameo appearance.
If I were Bush (gag gag) I would never withdraw the troops needed to keep our Embassy operating.
Let it happen on the next, presumably Democrat', President's watch.
The world will not soon forget this spectacle when it happens.
It is a political fireball that may sear and burn for decades.
______________
Just something to think about!

I don't think it was a matter of the fat lady singing this time. I think perhaps it's a bunch of little chubby gals singing and when you put them all together it becomes one humongous fat bitch bellowing out. All of the scandals-rendition, abu ghraib, guantanamo, WMD, the lies about mission accomplished, Rummy's "6 month" war, and the growing body count - all these plus the host of non-war scandals have shut the conservatives up. Listening to the absolute idiocy from some of the GOP candidates has also helped.