Iraq I: All Al Qaeda All the Time 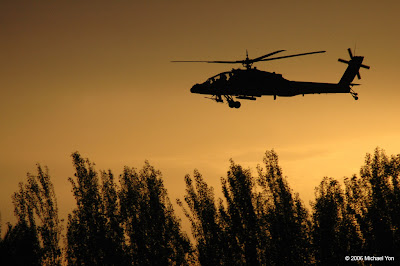 The Bush administration’s campaign to blow smoke up the collective American backside by calling all insurgents Al Qaeda is vexsome enough, but that label has now been applied to 11 men killed in a helicopter attack who may have been Iraqi civilians guarding against the very people the U.S. had targeted.

The incident occurred on June 22 in the remote , north of Baquba, during the opening days of Arrowhead Ripper, an operation to capture and kill Al Qaeda leaders and foot soldiers.

The command declared that attack helicopters armed with missiles had engaged and killed 17 “Al Qaeda gunmen” whom it said had been trying to infiltrate the village.

But the BBC’s Jim Muir, in a dispatch that has been ignored by the media, says that villagers are bitterly disputing that account and say the men were civilian guards trying to protect the village from exactly the kind of attack the military asserted it had foiled.

The villagers say that of 16 guards, 11 were killed and five others wounded when rockets were fired at them and then they were strafed with heavy machine gun fire.

"Minutes before the attack, they had been co-operating with an Iraqi police unit raiding a suspected insurgent hideout, the villagers said.

"They added that the guards, lightly armed with the AK47 assault rifles that are a feature of practically every home in , were essentially a local neighbourhood watch paid by the village to monitor the dangerous insurgent-ridden area to the immediate south-west at Arab Shawkeh and Hibhib, where the al-Qaeda leader Abu Musab al-Zarqawi was killed a year ago."

Verifying an account such of this in a remote area is tough with a finite number of reporters, many of them holed up in the Green Zone in Baghdad. As it is, an Iraqi journalist was killed in a bomb blast in Al-Khalis on June 11.

The Al-Khalis area has been a hotbed of insurgent activity, and two days before the attack the Iraqi army claimed that it had killed 11 insurgents when a checkpoint was attacked near the village.

There is no indication that the U.S. command is going to back down on its claim regarding the helicopter attack, especially in the face of the limited success of Arrowhead Ripper and the White House's "All Al Qaeda All The Time" mantra.

Sorry, but this incident smells like an error, albeit a bloody one, possibly based on miscommunication between the police unit and the attack force.

Photograph © Michael Yon
Posted by Shaun Mullen at 5:42 AM
Email ThisBlogThis!Share to TwitterShare to FacebookShare to Pinterest