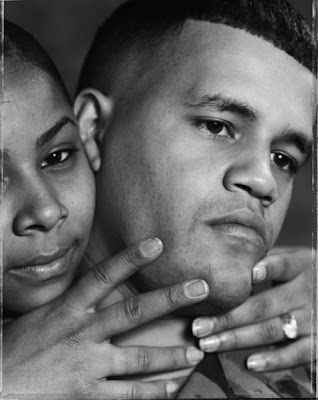 The sad story of Alex R. Jimenez, one of the two U.S. soldiers kidnapped and feared dead after an Al Qaeda-led ambush in May in the Triangle of Death has grown sadder still with the news that his wife may be deported.

Yaderlin Jimenez, like her husband, is a native of the Dominican Republican, but she entered the U.S. illegally prior to marying him in 2004. She has been listed for deportation despite being married to a naturalized U.S. citizen because she did not apply for a green card.

Jimenez, 25, of , , petitioned for a green card when he was home on leave from .

Their lawyer, Matthew Kolken, says that while Yaderlin, who is 22, wouldn't normally be eligible for a green card, her husband was seeking a hardship waiver for her.

"I can't imagine a bigger injustice than to deport someone's wife who is fighting and possibly dying for our country."


Photograph © Suzanne Opton
Posted by Shaun Mullen at 5:40 AM
Email ThisBlogThis!Share to TwitterShare to FacebookShare to Pinterest

This woman's husband is fighting for our country and is now missing. In such a case as this, we should not deport this wife who is already going through so much sadness and grief. Every rule has an exception and this is one where we should show logical compassion. We allow illegals who have committed several driving violations and have suspended licences to stay here and have no jail time (and then commit vehicle manslaughter as in Virginia) which is idiotic...........here we have a situation where this soldier is in dire straits and we are adding to his dilemma by threatening his wife with deportation. Use some sense people!

send the illegal back where she came from. if she really cared about being here then she would have lets us legals know. sorry for her loss but tired of taking care of those who are not legal. i am. what is the malfunction with these "people"?. we pay for their social security and benefits that they do not even contribute to. hate it but send her back.illegals are why we are having problems with ssi and welfare. used to care but done now.

yaderlin do not love alex jimenez she is only care for her green card
and his benefit(money)
she came to usa with her cousin green card not thru mexico
immigration did not investigate what she is doing out here
it breaking my heart evrery time i see how she lied.
I pray every day for alex to come home ,so she stop lying