MRAPs & Rumsfeld's War on the Cheap 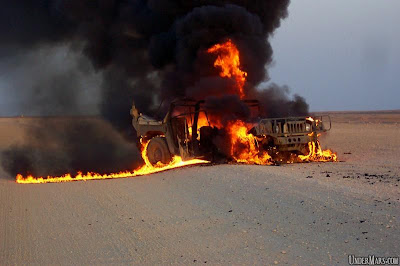 As if the whole frigging affair hasn't been so forked up to begin with, some of the consequences of former Defense Secretary Rumsfeld's decision to fight the Iraq war "on the cheap" have been nothing short of criminal.

It is an open secret that troops have lacked the necessary protection in body and vehicle armor from the outset of the four-plus year old war because Rumsfeld assumed that it would be over in a heartbeat.

The result of that arrogance is that the already strained Pentagon procurement and supply system has been painfully slow to respond to urgent requests from commanders in the field to speed up the purchase and delivery of armor.

Troops have had to jury rig their Humvees with makeshift armor and families of many a soldier have purchased body armor stateside and sent it to Iraq as they would have sent a box of Mother’s brownies in another war.

This outrage is amplified by the widespread use by insurgents of improvised explosive devices (IEDs), which can blow open the soft underbellies of the standard-issue Humvees and fricassee the troops inside. It is no surprise that over two thirds of American combat deaths are from IEDs.

It also is no surprise that many of the urgent requests from commanders for more armor ASAP have been ignored.

The New York Times says in an editorial:

"More than two years ago, according to newly disclosed documents, Marine commanders in Al Anbar Province, a center of the Sunni insurgency, submitted an urgent request for more than 1,100 Mine Resistant Ambush Protected Vehicles, or MRAPs, that have V-shaped bottoms able to deflect blasts from below. For reasons yet to be satisfactorily explained, military officials initially sat on the request and then ordered relatively few.

"Some, second-guessing the judgment of the battlefield commanders, apparently felt that Humvees with upgraded armor could do the job. Others may have been reluctant to invest billions of dollars in vehicles that might have little use after Iraq. Turf battles were probably also a factor, as a large-scale purchase might threaten future weapons programs. But is the war that Americans are fighting and dying in today."

The editorial goes on to say that only now is the Pentagon, prodded by Senator Joseph R. Biden Jr. and others, rushing to increase production of MRAPs.

Rumsfeld is said to be working on a memoir in an effort to rehabilitate his image by "setting the record straight."

Don’t except to read anything about this signal outrage when it is published.

IT'S ABOUT TIME
Meanwhile, the Dignified Treatment of Wounded Warriors Act – a response to embarrassing revelations about the shabby care of returning war vets, has been unanimously voted out of the Senate Armed Services Committee and is headed for a floor vote.

The panel voted Thursday to expand brain screenings and counseling for wounded vet and to reduce red tape for service members moving from Pentagon to Veterans Affairs care. The bill also would boost disability pay and provide more counseling for family members of tens of thousands of service members wounded in combat.

The action capped a flurry of activity in recent weeks to reach broad agreement on a single measure that would improve health care following reports of shoddy outpatient treatment at . In all, some 30 senators are sponsoring the measure, including three presidential candidates and two Senate committees — Veterans Affairs and Armed Services.