Iraq I: Suffer the Little Children 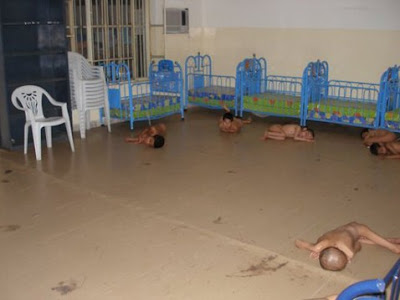 I have seen a lot of awful things over a long career in journalism and learned a long time ago to compartmentalize them. But there are times when the sights, sounds and smells of our inhumanity are too big for the little box I put this stuff in and it comes vomiting out. When that happens, it usually is because children are the victims.

Take a close look at the photograph above. These are young Iraqi boys, some tied to their cribs, lying on the floor at a government-run orphanage after they were discovered earlier this month by and Iraqi soldiers. A total of 24 naked and abused boys, ages 3 to 15 years old, were found in a darkened room without any windows. Many of the children were too weak to stand once released. A locked room full of food and clothing was found nearby.

The Ministry of Health is said to run the orphanage, which allegedly doubled as a brothel.

War, of course, most affects the oldest and youngest, and it is impossible to ascertain how many children have been killed, maimed and orphaned in the four-plus year old escapade the George Bush unleashed on Iraq.

The numbers that I found range from the absurdly low to absurdly high and usually are driven by one political agenda or another. But the bottom line is that millions of Iraqi children are being robbed of their childhoods. You might call it armed robbery.

My parents told me stories of how they had to walk miles through rain and snow to get to school when they were children. What will today's generation of young Iraqi's who survive the war tell their children about their own treks?

Between cordons of troops and sectarian militias?