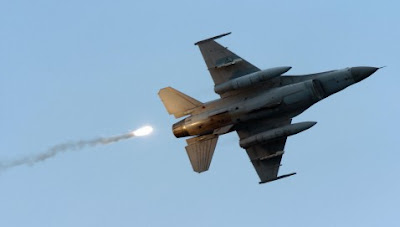 Was an F-16 shot down by insurgents in Iraq on Friday?

News services are not addressing that possibility in stories on the workhorse fighter jet, which was flying on a close air support mission for ground troops, according to a statement from the Air Force.

But I second the BooMan is asking what the fork an F-16 was doing flying close air support, a job typically entrusted to purpose-built helicopter gunships and A-10 Warthogs.

Not so fast there, says military blogger Bill Roggio, who says that the F-16 conducts most close air support mission in Iraq. Coulda fooled me.

"Considering the number of sorties flown daily in Iraq, I'm surprised that's the first plan lost in over six months. Could it have been shot down? Sure. Anything is possible, although I'll believe it when I see a report confirming it.

"Look at the Soviets' losses in Afghanistan. The Iraqi insurgents and Al Qaeda absolutely blow at taking our aircraft down, especially considering the fact that terrain and number of sorties we fly is on their side."

And for good measure provides a link to a video of an F-16 flying in close support.

The Ohio Air National Guard plane was deployed to the 332nd Air Expeditionary Wing, headquartered at Balad Air Base north of .

Awesome shot. I think I have an image from a few hours earlier.