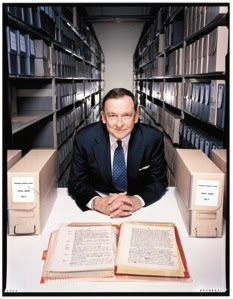 The , the literary archive of the of at , contains thirty-six million manuscript pages, five million photographs, a million books, and ten thousand objects, including a lock of Byron’s curly brown hair. It houses one of the forty-eight complete Gutenberg Bibles; a rare first edition of "Alice’s Adventures in Wonderland," which Lewis Carroll and his illustrator, John Tenniel, thought poorly printed, and which they suppressed; one of Jack Kerouac’s spiral-bound journals for "On the Road"; and Ezra Pound’s copy of "The Waste Land," in which Eliot scribbled his famous dedication: "For E. P., miglior fabbro, from T. S. E." Putting a price on the collection would be impossible: What is the value of a first edition of "Comus," containing corrections in ’s own hand? Or the manuscript for "The Green Dwarf," a story that Charlotte Brontë wrote in minuscule lettering, to discourage adult eyes, and then made into a book for her siblings? Or the corrected proofs of "Ulysses," on which James Joyce rewrote parts of the novel? The university insures the center’s archival holdings, as a whole, for a billion dollars.

The current director of the center is Thomas Staley (see photo). Seventy-one, and a modernist scholar by training, he is mercurial and hard-driving. Amid the silence of the center’s Reading Room, he often greets visiting scholars with a resonant slap on the back. In college, at a Jesuit school in , Staley pitched in a summer baseball league, specializing in a slow, sinking curve. His "crafty pitch," as he calls it, was good enough to attract the attention of professional scouts. The , under Staley’s leadership, easily outmaneuvers rivals such as Yale, Harvard, and the British Library. It operates more like a college sports team, with Staley as the coach—an approach that fits the temperament of .

I have to tell you it wasn't really the library that made me a writer. That dubious accolade must surely go to the film of Doctor Zhivago. My brothers and I were always hanging around our house at night looking for things to burn, but this night I found myself watching Dr Zhivago. There’s a scene in that movie when Omar Sharif comes gliding down the stairs in a flowing dressing gown, Omar Sharif, you know, following his rather impressive moustache down the stairs. Well, he arrives in this room – a giant study, you know, French windows, flowery armchairs, the lot. He sits down at this elegant ecritoir and looks out of the windows, where he sees, in quick succession, a host of daffodils, a bank of snow, a full moon and a herd of deer. (God bless .) Anyhow, I'm watching this with wide eyes. Next thing he lifts up a feather pen and – without any ink blotches or crossings out or mistakes, and it takes him about 3.4 nanoseconds – he writes the 'Sonnet to Lara'. After which he goes upstairs and goes to bed with Julie Christie. I remember watching that very closely and thinking, "I could do that."

Michael Pollan’s delectable new book, "The Omnivore’s Dilemma," examines the wretched state of modern agriculture—and the unhealthy relationship most of us have with what we eat—by tracing the origin and consumption of four very different meals. He concludes that Americans now live in a wasteland of bland, interchangeable commodities, dominated by monocultured corn and fueled by imported oil. It’s not a pretty sight, but Pollan writes with such verve and insight that the book is hard to put down.

For the first meal, Pollen takes his family to McDonald's; like 19 percent of all meals in the , this one is eaten in the car. Next, he prepares a meal from ingredients labeled "organic," a feel-good label that is now often applied to food produced in industrialized, energy-wasteful ways. He then visits a farm in western where sustainable multicrops, free-range animals, and ecological reuse create a happily updated version of the traditional family farm. And finally, he turns hunter-gatherer to create a meal with ingredients from the gardens and forests of : he shoots a feral pig, hunts mushrooms, picks cherries and lettuce, and even captures wild yeast for his bread.

As Pollan describes the making of each meal, he examines various aspects of the dysfunctional agribusiness system that feeds us cheap food but extracts the cost in other ways: degraded ecosystems, bankrupt farmers, hollowed-out communities, tortured animals, tasteless food, increased obesity and diabetes, and military expenses to protect our sources of oil. The consequences of how we eat ramify in every direction, affecting economy, environment, psychology, and government—and the effects are usually bad.

Yet, still, the dreamers dream. Brendan Sullivan, 25, moved to after studying creative writing at in .

He hasn’t landed a book deal for his novel, but is determined to find a publisher. "Writing has ruined my life and cost me many, many girlfriends," he wrote in an e-mail. "I have thrown away several careers and one college degree to spend my time working in bars, D.J.'ing in bars and drinking my rejection letters away. I wouldn’t wish this on my worst enemy, and I’ve made many of them since I started . . . I also abandoned my agent with words harsher than those I’ve saved for lost loves."

Mr. Sullivan has held 27 jobs to support his writing career, from selling chapstick on the street to being a night guard in an art gallery ("That was my favorite job ever, because I just sat in a chair and read novels all day," Mr. Sullivan added.)