Iraq I: A Conservative Prayer Not Answered 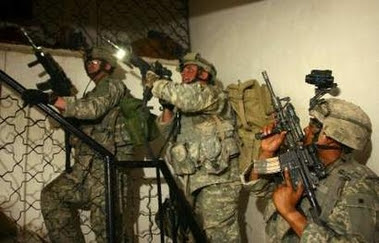 U.S. soldiers prepare to search a house in Baquba

Even this gang knows that this is it. Anything less than a quantitative victory against the insurgent infidels in the streets of Baquba and the parched plains of Diyala will be adjudged a failure.

I also want the offensive – Operation Arrowhead Ripper , which is part of a still large offense -- Operation Phantom Thunder – to succeed.

Never mind that there was not an Al Qaeda operative to be found in when Saddam Hussein was running the show. Nor the fact that the hydra-head insurgency grew out of an ineptly planned and poorly executed post-invasion occupation directed by an arrogant White House that had zero insight into the daunting challenges at hand.

These are bad guys no matter where they lurk.

Also never mind that the conservative noise machine is portraying the offensive as saving that nascent Iraqi democracy.


This obscene canard is swaddled in the fictions that the Al Maliki government is working for national unity, the parliament can actually get a quorum, let alone do anything of consequence, that a thousand or so Iraqis have not been killed this month in the never ending sectarian bloodbath, that the Shiite-dominated Iraqi units accompanying Americans in the offensive are being greeted as liberators by Sunnis burghers of Baquba.

Even if there is evidence that a goodly number of Al Qaeda leaders have been brought to ground.

It turns out that in yet another classic instance of the Iraq version of Wack-a-Mole, the top targets fled Baquba in advance of the offensive.

You sir are a self serving asshole liberal cunt!

I have to agree, fucking goof thinks he can write!

It's so much easier to bloviate than offer arguments in response.

You said what I didn't speak aloud: The war is over; we lost, they beat us. Time to end the insanity and come home.

Your response regarding the first two posts is more than charitable. "Bloviating"? Their respective comments represent nothing more than the insipid fart of the common troll: a malodorous noise quickly wafting away into a diffuse vapor.

Surely, such persons are incapable of argument.

As to your article, it seems that the "prayers" from these loathsome hawks go unheard as self-serving tripe. My two cents...

Keep up the good work.