What's The Greatest Nation on Earth to Do? 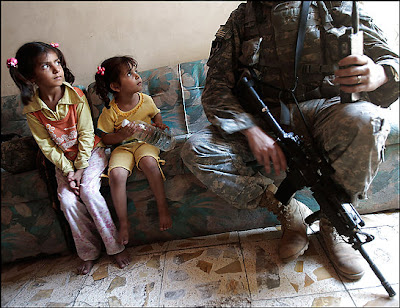 Lost in the miasma of debate over the war is a key question: What was the ’s obligation to the Iraqi people once the Saddam Hussein regime was toppled?

The Bush administration believed that it had a responsibility to nurture a new government, new constitution and national elections. All eventually did come to pass despite a post-invasion occupation so ill planned and so wretchedly executed that in one fell swoop the U.S. squandered the modicum of good will Iraqis accorded it and tore open ancient fault lines between Shiites and Sunnis, triggering a refugee crisis and civil war that has become a one-stop shopping dream for Al Qaeda and other insurgent groups.

Regrettably, my question answers itself because of the diabolical shape that is in: The U.S.’s obligation has become substantially greater because of the mess made by hubristic stage managers in who always have been more interested in politics over policy and image over reality.

A cascade of developments in recent days further begs the question:

True to form, George Bush and two key players, Ambassador Ryan Crocker and General David Petraeus, have intimated that Judgment Day, or in this case Judgment Month, has been pushed back. Again. September was when Petraeus was to report on the progress of the last gasp-surge strategy as Congress got down to the business of funding the war for another year. Now they say that’s much too early to judge anything.

* Speaking of the surge, it has played out precisely as I and many other observers predicted: Some Baghdad neighborhoods are indeed safer, but most are not. Meanwhile, it’s business as usual out in the hustings where troops, with minor assistance from the pathetic Iraqi army, continue to play Whack a Mole with the insurgency. casualties are up and Iraqi civilian casualties are only slightly down. The bottom line is that there were never the troops to do the job right.

* Arrowhead Ripper, a component of the surge, came a cropper as the much vaunted operation to capture or kill Al Qaeda leaders and foot soldiers in Baquba whimpered to an unsatisfactory conclusion. As I and many other observers predicted, most of the bad guys had melted away before the first Stryker units hit the city limits.

Senator Richard Lugar, one of the president’s staunchest supporters, broke ranks with the diminishing pro-war congressional minority and screwed up the courage to state the obvious: The war is a disaster militarily and diplomatically and has seriously compromised the ’s national security interests in the and beyond. Public opinion polls show that a large majority of Americans no longer believe the war can be won in the traditional (which is to say military) sense and want troop withdrawals to commence ASAP. And while they’re unhappy with the President and Planet Cheney, they have damned little good to say about the Democratic congressional majority.

As Colin Powell famously remarked, having broken the now owns it. But the political clock has overtaken the military clock and plucking victory from the jaws of defeat is no longer possible.

What’s the greatest nation on earth to do?

Photograph by Chris Hondros/Getty Images
Posted by Shaun Mullen at 11:27 AM
Email ThisBlogThis!Share to TwitterShare to FacebookShare to Pinterest