Operation Why Didn't We Do This Earlier 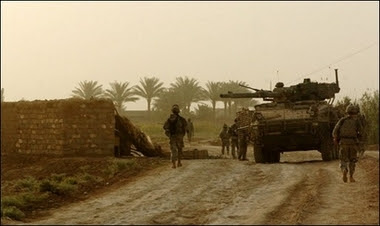 The dead man ignored warnings to stay inside.

Operation Arrowhead Ripper, the problematic name of one part of the largest offensive in since 2003, is well underway, the fighting is heavy and there are early signs that some progress is being made.

The operation’s goal is simple but ambitious:

A methodically applied squeeze against Al Qaeda of Mesopotamia, whose fighters have repeatedly confounded U.S. forces by slipping away when confronted, leading to smart-aleck comparisons with whack-a-mole, the arcade game where as soon as you knock down one mole another pops up.

So why is the name of the operation problematic? A more apt moniker might be Operation Why Didn’t We Do This Earlier. This is because of the painfully slow learning curve for U.S. commanders in fighting a hydra-head insurgency that grew out of an ineptly planned and poorly executed post-invasion occupation directed by an arrogant White House that had zero insight into the daunting challenges at hand.

The offensive targets the areas where Al Qaeda insurgents have fled from , notably Baquba, the capital of , where an estimated 300-500 insurgents are holed up among the civilian population.

As it was in Falluja in Anbar, dealing with that civilian population – which is to say separating the insurgents from the locals – will be a huge challenge as U.S. troops conduct house-by-house searches in Baquba, where the insurgents have imposed their own strict brand of Islamic creed.

One American had died clearing a roadside mine and 41 insurgents had been killed as of Thursday morning, although 14 other U.S. soldiers died elsewhere in Iraq, bringing the total for June to 71.

American helicopters have dropped leaflets urging residents to stay indoors, but the request has been widely ignored, giving insurgents a means of eluding their pursuers because they can simply hide their weapons and mingle until the threat passes.

Michael Gordon of The New York Times reports that:

"To frustrate such plans, the Americans intend to take fingerprints and other biometric data from every resident who seems to be a potential fighter after they and Iraqi forces have gained control of the western side of the city. The Americans will also test for the presence of explosive material on suspects' hands."

Meanwhile, Michael Yon is in theater and posting here, while Bill Roggio is providing comprehensive updates on Operation Phantom Fury, the overall offensive, at The Fourth Rail.

U.S. Armed Forces Photograph via AFP
Posted by Shaun Mullen at 4:47 AM
Email ThisBlogThis!Share to TwitterShare to FacebookShare to Pinterest