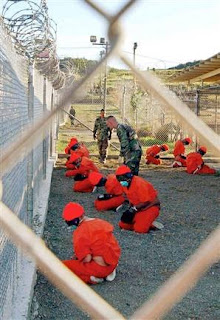 The news today that the Supreme Court will review two Guantánamo Bay detainee-related appeals prompts me to make a statement that seems outrageous on its face considering the high court’s sprint to the right:

It will side with the detainees in their assertion that they cannot be indefinitely confined without trial.

Howcum? Because this is more or less a replay of last year's Hamdan v. Rumsfeld decision, which is possibly the court's most important of the young millennium, including yesterday's school deseg blockbuster.


In Hamdan, the court eviscerated the junk law (as opposed to junk science) on which the Bush administration based its original plan for trying detainees before military commissions, rejecting out of hand the specious claim that the 9/11 attacks had changed everything and the president could turn 230 years of American jurisprudence on its ear damned well do what he pleased where he pleased.

The court also rebuked Bush for attempting to suppress the habeas corpus provision of the Constitution (which was like telling it to go screw itself) and for violating the Uniform Code of Military Justice and Geneva Conventions.

The high court ruled 5-3 against the administration in Hamdan with Chief Justice Roberts recusing himself because he had been involved in the case at a lower court level.

Given that the White House merely paid lip service to the ruling and then compelled a largely compliant Congress to again give it carte blanche in the form of a new but nearly identical law, I would anticipate that the Supremes will again slap the president -- even with Roberts participating.

The stakes could not be higher for an administration that remains drunk with power despite enormous setbacks, as well as a world standing at low ebb.

But having claimed the right to determine who are enemy combatants and detain them indefinitely without charges, the White House cannot retreat from that position without appearing to be weak, and appearances in the Age of Bush have been more important than realities, just as politics often trumps policy, or in this case tramples on the very foundations of American jurisprudence.

Posted by Shaun Mullen at 1:58 PM
Email ThisBlogThis!Share to TwitterShare to FacebookShare to Pinterest