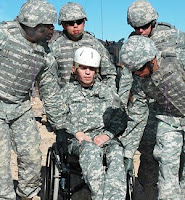 Sergeant Frank Sandoval left this mortal coil this week after a long struggle to overcome complications from brain surgery after being wounded in Iraq in 2005.

After a long and heroic battle against a traumatic brain injury, he finally lost the fight and succumbed to the odds and became another statistic in a war that very few people support and even fewer can tell you why it was important that he paid the ultimate price. Inquiring minds want to know, will he (and others like him), count in the casualty rolls or are they consigned to the dust bins of the don't ask, don't tell division of death statistics? Rest in peace Frank and thank you for your sacrifice, I just wish it hadn't been in vain.

Photograph by Mary Flores
Posted by Shaun Mullen at 5:11 AM
Email ThisBlogThis!Share to TwitterShare to FacebookShare to Pinterest

I've been following Frank's recovery and this saddens me terribly.
All of Franks suffering and hard work, along with his doctors and families, was undone by an infection which could have been prevented.
He wouldn't have been having this additional surgery if they hadn't given him MRSA six months ago implanting the same patch.
They put him through more hell on top of the hell from the explosion.
Our military medical system needs help immediately. All the best efforts are being undermined by Acinetobacter Baumannii mainly and MRSA as well.
www.iraqinfections.org for more