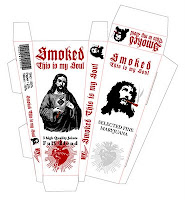 Providing further evidence that it is disdainful of freedom of speech, the emergent Supreme Court majority has ruled 6-3 against a then-Alaska high school student in the notorious “Bong Hits 4 Jesus” case.

As freedom of speech cases go, this one was fairly cut and dried.

Joseph Frederick had unveiled a banner with the apocryphal message within view of school property. His principal crossed the street, tore down the 14-foot banner and suspended him for 10 days.

Arguing for the principal, who was liable for damages because she admitted under oath that she knew the suspension violated students’ rights, was ’s Moral Busybody aka former special prosecutor Ken Starr.

"It was reasonable for (the principal) to conclude that the banner promoted illegal drug use-- and that failing to act would send a powerful message to the students in her charge."

But Your Honor, Frederick wasn't on school property. At what distance would his free-speech rights be restored? Four hundred yards? One mile?

"This case began with a silly nonsensical banner, (and) ends with the court inventing out of whole cloth a special First Amendment rule permitting the censorship of any student speech that mentions drugs, so long as someone could perceive that speech to contain a latent pro-drug message."

Meanwhile, in other rulings made public today, the Black Bathrobe Gang threw out a key campaign finance reform law provision, sided with developers and the Bush administration in an environmental case involving endangered species, and ruled against ordinary taxpayers who challenged a White House initiative that helps religious charities get a share of federal money.
Posted by Shaun Mullen at 5:36 AM
Email ThisBlogThis!Share to TwitterShare to FacebookShare to Pinterest