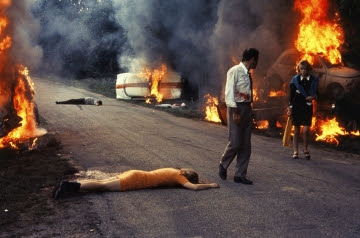 I always have had an iffy relationship with French New Wave cinema in general and director Jean-Luc Godard in particular, so when I first saw his Week End at an art cinema in the late 1960s, I knew it was really good but didn't quite know why. I was afflicted with the same uncertainty when I saw Godard’s Breathless and Truffaut’s Jules and Jim, as well.

Godard, I’m told, was the first filmmaker to make movies reflect themselves, Exhibit A being Breathless in which the gangster hero deliberately imitates movie myths; for example, constantly checking himself in the mirror to see if the angle of his cigarette is properly Bogartian.

Week End is the culmination of Godard’s most productive period. He uses a weekend traffic jam in rural France, of all things, to depict an apocalyptic vision of man’s cruelty to man as the world slowly self destructs, which seemed like a real possibility at the time the movie was made. (Good thing prospects are so much better today, eh?)

Week End is alternately surreal and slapstick, and as goofy as this seems, I believe it is a whole lot more accessible to me nearly 40 years on because of all the Monty Python skits and movies that I had absorbed in the interim. And the knowledge that, if anything, we are a whole lot closer to that apocalypse.

That make me real good film critic, no?