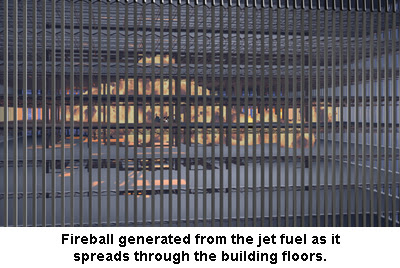 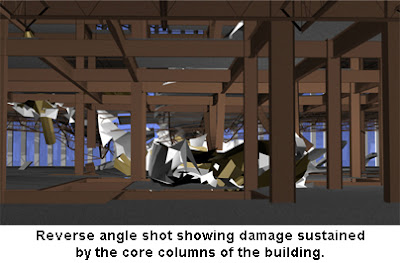 I was in the mountains and probably one of the relatively few people in the U.S. who was not around a television on the morning of September 11, 2001. So it strained credulity to hear radio reports that first one and then the other massive twin tower at the had been reduced to a toxic cloud of dust and rubble after taking hits from hijacked jetliners.

It still was with a sense of disbelief that we watched the repeatedly played images of the towers being struck and crumbling in slow motion when the DF&C and I finally made it to civilization and a television that evening.

But nearly six years later, the unbelievable has become a little more believable with the release of a Purdue University study that used 3-D simulation to give engineers more information about the collapse of the towers.

The simulation shows that when the planes struck the towers, they stripped away crucial fire-proofing material. The aircrafts' fuel then ignited and produced a torrent of flaming liquid that knocked out columns within the buildings.

The weakened towers then collapsed under their own weight.

Researchers say the work shows the absolute need to fireproof steel structures. When the was built, codes did not require steel beams to be fireproofed.

The simulation will do nothing to silence 9/11 conspiracy freaks, many of whom claim that the attacks were an inside job, but it is horrifyingly fascinating nonetheless.

Click here for more on the study and here for a video of the simulation.