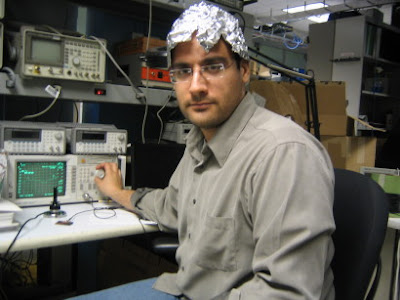 Talk radio is running America. We have to deal with that problem.

I am surprised that the Politerati, or DC’s chattering class, have not seen the parallels between Hillary Clinton and Richard Nixon. They both have brilliant strategic minds, suffer from extreme paranoia about the enemy of their agenda, and both are extremely secretive. Nixon had very high negatives, and re-launched his “brand” image in the 1968 campaign, just as Hillary is doing in 2007. In short, Hillary is Nixon in a dress, or more appropriately Nixon in a pant suit. We saw what happened the first time we entrusted the White House to a person with behavioral traits like this. Do we want to go through it again?


Pentagon officials confirmed . . . that military leaders had considered, and then rejected, building a "gay bomb."

The watchdog group, The Sunshine Project, tracks military spending and through their work, uncovered a strange military proposal to create a hormone bomb that could allegedly turn enemy soldiers into homosexuals and thereby make them more interested in pursuing sex with each other than in fighting.

demanded that withdraw a knighthood awarded to author Salman Rushdie, as a government minister said the honour gave a justification for suicide attacks by Muslims.

The has a similar interest in dramatizing origins, but sees natural history as divine history. And now that many museums have also become temples to various American ethnic and sociological groups, why not a museum for the millions who believe that the Earth is less than 6,000 years old and was created in six days?

The 15-year-old son of two doctors performed a filmed Caesarean section birth under his parents’ watch in southern in an apparent bid to gain a spot in the Guinness Book of World Records as the youngest surgeon.