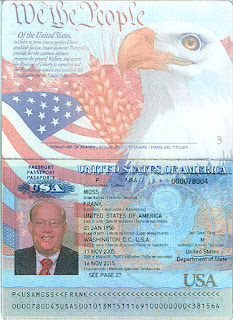 Ah, yet another thing to blame the Bush administration for: Making millions of Americans virtual prisoners in their own country because of an enormous backlog of passport applications.

With the coming of summer travel season, this is no small matter.

Take the case of a friend who is a world traveler: She mailed in her passport to be renewed in early March. Three-plus months later, no passport. So she called an 800 number to find out what the problem is.

The problem is that the State Department is so short staffed (blame the war) that it is overwhelmed with passport applications and renewals. The backlog is largely due to a new rule that requires citizens to have passports when flying to , , the and .

My friend’s passport sat in a vault somewhere in western for six weeks until it was moved to a queue to await renewal.

"How long is that going to take?" she inquired.

"We have no idea," was the response.

"Who can I talk to about expediting the renewal?" she asked.

"So there’s no one in charge?"

"Do you know that I’m a prisoner in my own country?"

Because of the outcry (read upset tourist industry officials), the government announced last week that it suspending the new air travel rule until September as long as travelers to those countries carried a printout receipt showing they had applied for a passport.

Meanwhile, travelers who paid an extra $60 to get their passports expedited - and still had to wait for them - can now get a refund.

If your travel plans have been delayed or ruined, you know who and what to blame.

Is this a great country or what?