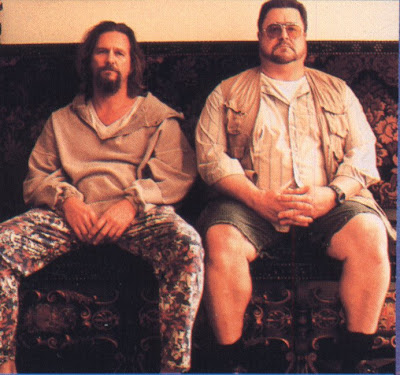 Why am I running a photo from The Big Lebowski today?

Because I have decided, after careful deliberation and an excellent bottle of Jacobs Creek 2005 Merlot shared with the DF&C, that the 1998 comedy is the greatest ever. Greater than fare like Birth of a Nation, Gone With the Wind, Citizen Kane or To Kill a Mockingbird.

That's my story and I'm sticking to it.

With all the usual caveats about opinion polls, it's nevertheless worth noting that recent polls continue to suggest that the Republicans are headed for electoral catastrophe in November 2008. Voters don't seem to be especially enthusiastic about either of the major parties (and it's hard to blame them), but they seem to be more fed up with the Republicans by decisive margins.

I think that when the "honest conservatives" reject Bush they’re just setting up their assault on the Democratic president they expect to see elected next year. Their way of digging themselves out from under the Bush disaster (and obscuring their own massive role in that disaster) will be to swear that "Never again can an American President be allowed that kind of free hand!" This will justify their fighting the new Democratic President tooth and nail for every inch of ground.

If you got bored with Beltway politics in the first six veto-free years of the Bush administration, buckle your seatbelts -- because the ride is about to get bumpy indeed. Congress has twelve appropriations bills coming to the White House, and three-quarters of them look ripe for vetoes, as President Bush has decided to try fiscal responsibility in his last two years in office.

is President Bush's war, but the Democrats are quickly getting tagged with some blame for it. One of the reasons Congress is in such bad odor -- less popular even than Bush in recent polls -- is that Democrats look feckless on how to proceed in Iraq, and not just because they lack the votes to cut off funding. Are they neo-isolationists, determined to exit the region as soon as possible? Democrats like freshman Rep. Patrick Murphy, who saw ground action as an Army captain, insist not. They want to get out of and get tough on Al Qaeda at the same time. But the idea isn't getting through.
-- JONATHAN ALTER

The challenge . . . is to devise an alternative to Bush’s failed strategy. To pass muster, any such strategy will have to recognize the limits of American power, military and otherwise. It must acknowledge that because the cannot change Islam, we have no alternative but to coexist with it.

The sad truth is that if the FBI really is following anyone on the American left, it is engaging in a huge waste of time and personnel. No matter what it claims for a self-image, in reality it's the saddest collection of cowering, ineffectual ninnies ever assembled under one banner on God's green earth. And its ugly little secret is that it really doesn't mind being in the position it's in – politically irrelevant and permanently relegated to the sidelines, tucked into its cozy little cottage industry of polysyllabic, ivory tower criticism. When you get right down to it, the American left is basically just a noisy cocktail party for the college-graduate class.

Politicians are circling around hedge funds like vultures. They want to raise taxes on hedge funds, maybe by treating their capital gains as normal income. Why? Because hedge funds are mysterious — do you know what they really do? — and they have a lot of money. Make billion-dollar profits, get headlines, attract taxers — it's as certain as ants at a picnic.

-- DAVID BOAZ
Ladies and gentlemen, is there a more compelling reason to use condoms during oral sex? No. There is not.