Another Setback For The Torture Regime 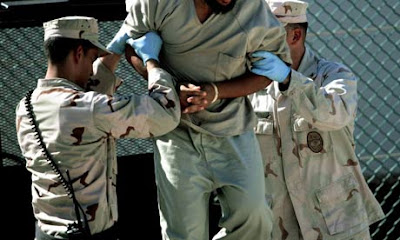 Although no one is coming right out and saying so, the decision to drop charges against Mohammed al-Qahtani, the so-called 20th 9/11 hijacker, after he spent nearly seven years in custody is because he was tortured, the Bush administration is having a dickens of a time getting anybody convicted, let alone tried, when torture rears its ugly head these days, and has an increasingly urgent need to cover it's criminally culpable backside.

Why just the other day, the military judge presiding over the case of Al-Qahtani and five other men facing death penalty trials at the Guantánamo Bay branch of the Rumsfeld Gulag gave the boot to a key general in the military tribunal system because of his obvious partiality to the prosecutor.

This followed another military judge's threat to abort the prosecution of terrorist Omar Khadr unless the government coughs up the logs of Khadr's five-plus years of captivity, something that it has been reluctant to do because . . . he was tortured.

Which came hard on the heels of a former Guantánamo prosecutor stating that political pressure and . . . yes the use of torture, had undermined the entire tribunal system.

The case of Al-Qahtani is especially odoriferous.

The Saudi apparently missed being able to board one of the three 9/11 planes because he had been denied entry to the U.S. by an immigration agent. He was arrested later and bounced from brig to brig before ending up in Gitmo, where he is said to have been sexually taunted, forced to perform dog tricks and forcibly given enemas, although we can't be sure of this because his records were mysteriously lost.

As Emptywheel notes, it is probable that Al-Qahtani's five co-defendants also were tortured but remain on trial.

The reason that the Al-Qahtani prosecution was dropped like a live grenade may be that he didn't reveal anything admissible and later recanted the confession he signed after being tortured. But there is an even bigger reason, as well:

The White House was so eager to literally put the screws to Al-Qahtani -- and so disinterested in making its case the old-fashioned way through painstaking investigative work -- that no less personages that then-White House Counsel Alberto Gonzales and David Addington, who is Vice President Cheney's point man for torture, flew down to Gitmo to push a key staffer there to write a memo authorizing the torture of him.

You see, putting Al-Qahtani on trial also would risk putting on trial Bush administration insiders like Gonzo, Addington, Rummy and even Dick himself.

Meanwhile, the Globe and Mail in Toronto reports that a Canadian court has ordered the release of a 2004 Royal Canadian Mounted Police memo indicating that the U.S. paid Pakistan a $500,000 bounty for Abdullah Khadr, a Canadian who is Omar Khadr's oldest brother and is in detention in Canada while the U.S. seeks his deportation for offering "material support" for terrorism.

Abdullah Khadr's lawyers say that he was detained in Pakistan for 17 days and tortured under CIA supervision. In any event, it seems unlikely that the U.S.'s good buddy north of the border will approve his extradition if it is tainted by torture by the U.S. or one of its surrogates.

* * * * *
The Bush administration's failure over the years to bring to trial the vast majority of the hundreds of alleged terrorists arrested since 9/11 and to get a scant few convictions, usually after the major charges are dropped, can be attributed to combination of ineptness and prosecutorial chicanery that has made even a goodly number of conservative judges apoplectic.

But the more recent revelations of the extent of the torture regimen and the lengths that arrogant administration officials went to justify the Nazi-like interrogation techniques without giving a waterboard about the consequences have had a welcome chilling effect on a tribunal system run amok.

The irony is that Al-Qahtani, Khadr and many of these thugs are almost certainly guilty as sin and deserve to feel the iron fist of the American legal system when great harm has been done.

But in its zeal to prosecute the so-called War on Terror and make political points, the administration determinedly bypassed that system, declared itself to be above the law, gave the green light to torture and engaged in numerous other extralegal activities.

In the end, how many of these thugs will escape justice because our government failed to honor that hallowed concept?

Photograph by Brennan Linsley/The Associated Press
Posted by Shaun Mullen at 1:30 AM
Email ThisBlogThis!Share to TwitterShare to FacebookShare to Pinterest