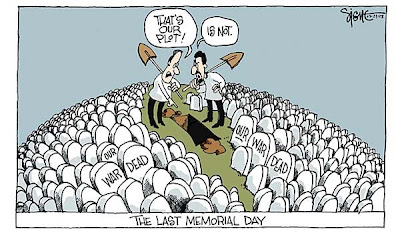 Clinton's recent comments about hardworking white voters and the RFK assassination have not improved her perceived electability. She would do better to stop antagonizing Obama supporters and undecided supers, and to get some rest and lay low for a while, than to continue what even the Governor of her state sees as desperate tactics.

For these reasons, it really appears that one of two things is the case. Either Clinton is somewhat unhinged and is engaged in self-destructive behavior, or she is actively undermining Obama's chances, not of winning the nomination, but of winning the election in November.

And in either of these two cases, it is necessary for responsible people to ask her to drop out. That's the answer to the question she could not answer.

It's difficult to overstate how essential [powerful Shiite cleric Grand Ayatollah Ali al-] Sistani's support has been for the task of rebuilding Iraq, or how quickly the U.S. would lose what little legitimacy it still has there if Sistani were to indicate that U.S. forces were no longer welcome. If this report is accurate, it clearly indicates that he is leaning in that direction.

This could also represent the final nail in the coffin of the neoconservative fantasy of establishing an enduring military presence in Iraq, from which to project U.S. power throughout the region. The article notes that the shift in Sistani's position "underlines possible opposition to any agreement by Baghdad to allow a long-term U.S. military foothold in Iraq — part of a deal that is currently under negotiation and could be signed as early as July."

Only the two summary pages of her 2006 form were released. She had a total income of more than $6 million. She paid more than $1.7 million in taxes.

Though Gawker’s bloggers often worked from home, I went to the office every day at first. I was used to communicating with most people I knew via instant messenger, but it seemed important to see Alex, my co-editor, in person. I figured that we’d be able to express ourselves more easily by actually turning to each other and speaking words and making facial expressions rather than typing instant messages. But because we were so busy, we continued to I.M. most of the time, even when we were sitting right next to each other. Soon it stopped seeming weird to me when one of us would type a joke and the other one would type “Hahahahaha” in lieu of actually laughing.

Someone close to Obama needs to tell him that the jig is up (and before someone emails me, "the jig is up" is not a racist phrase as far as I know, except possibly when applied to Irishmen). Or perhaps someone with stature in the party, someone like Bill Clinton, though probably not him, needs to say enough is enough.

By stubbornly refusing to concede defeat Obama has put this country at risk. If he steals the nomination from Hillary, women around the country will become completely unhinged, rioting in the streets and withholding sex from their husbands. We all know how hysterical women can get when they don't get their way. Hell hath no fury like a woman scorned. Does Obama want to see our cities ravaged by looting and violence?

Sen. Obama is right that the should be willing to engage on its nuclear program without "preconditions" — i.e. without insisting that first freeze the program, which is the very subject of any negotiations. He has been clear that he would not become personally involved until the necessary preparations had been made and unless he was convinced his engagement would advance our interests.

President Nixon didn't demand that end military support to the Vietnamese killing Americans before meeting with Mao. President Reagan didn't insist that the Soviets freeze their nuclear arsenal before sitting down with Mikhail Gorbachev. Even George W. Bush — whose initial disengagement allowed dangers to proliferate — didn't demand that Libya relinquish its nuclear program, that North Korea give up its plutonium, or even that Iran stop aiding those attacking our soldiers in Iraq before authorizing talks.

-- JOE BIDEN
Police rescued the African grey parrot two weeks ago from a neighbor’s roof in the city of , near . After spending a night at the station, he was transferred to a nearby veterinary hospital while police searched for clues, local policeman Shinjiro Uemura said.

He kept mum with the cops, but began chatting after a few days with the vet.

"I’m Mr. Yosuke Nakamura," the bird told the veterinarian, according to Uemura. The parrot also provided his full home address, down to the street number, and even entertained the hospital staff by singing songs.