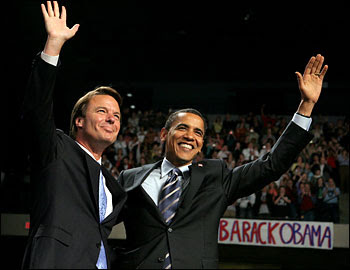 John Edwards endorses Obama, probably to annoy the heck out of the 7 percent of West Virginia Democrats who voted for him yesterday. I can't help but suspect that Edwards won't be attorney general in the new administration, or at least chief judge at the war crimes tribunal.

In a reprise of his own stump speeches, John Edwards simply switched pronouns and endorsed Barack Obama tonight, positioning himself as the leading candidate for Attorney General in the new Administration.

In doing so, he was backing the clear winner of the nomination, preceding it with a eulogy for Hillary Clinton's campaign.

This is an interesting development -- it seems that Thad Cochran, 70; Pete Domenici, 76; Chuck Grassley, 74 all told The Hill that they're too old to be Vice President. They're also, of course, all roughly the same age as the Republican Party's presidential nominee. I think this'll be an interesting issue to keep an eye on. Young people will definitely mock McCain for being old and his age will probably render people below a certain age immune to the cult of personality around him that's impacted a lot of self-loathing boomers in the press.

But if anyone develops serious worries about McCain's age per se, it'll probably be his fellow senior citizens. Most folks I'm familiar with in their seventies are, like these GOP Senators, pretty aware of and realistic about their own situation and that of their friends and other peers in ways that might give them doubts about McCain.

[A]s my husband pointed out this morning, if the inability to concede error or defeat even in light of irrefutable, empirical evidence and in the face of spiraling support and tanking morale is feminism, George Bush must be the feminist icon of the ages.

-- DAHLIA LITHWICK
This is one of the most remarkable things I’ve ever seen in a political poll. It beats the 90% approval rating of Bush after 9/11 and even surpasses the 60+% support enjoyed even after it was revealed he is a sniveling liar.

No less than 82% of the American people think the country is on the wrong track.

Don’t talk to me about the poll’s internals or bias. Are you paying attention? 82% of your fellow countrymen think that is a sucky place to live right now.

An unwelcome legacy of Sen. Hillary Rodham Clinton's faltering campaign for president is a $21-million debt, half from her own pockets, and some political insiders think she may have to turn to her political nemesis to help resolve it.

The Rev. John C. Hagee, whose anti-Catholic remarks created a controversy when Senator John McCain received his endorsement for the Republican presidential nomination with fanfare, has issued a letter expressing regret for "any comments that Catholics have found hurtful."

The letter was issued after weeks of conversations between Mr. Hagee and Roman Catholic Republicans about repairing the damage to Mr. McCain's campaign and the alliance built over many years between conservative Catholics and evangelicals.

Mr. McCain said Tuesday that he had not been involved in brokering the apology letter from Mr. Hagee, a megachurch pastor in who broadcasts to 200 countries, but that he found it "a laudable thing."

A steep descent brings 's plane to 's hilltop airport. After an appropriate wait, she steps from the plane and pretends to wave to a crowd of supporters; in fact, she is waving to 10 photographers underneath the airplane's wing. She pretends to spot an old friend in the crowd, points and gives another wave; in fact, she is waving at an aide she had been talking with on the plane minutes earlier.

Samuel A. Maverick (!803 - 1870) had a life filled with adventures too numerous to list, but in his later years as a rancher who refused to brand his cattle, his name entered the American vocabulary as a non-conformist; a person of independent thought and action. That's hardly descriptive of John McCain, a man who followed in the family tradition of military careers, used family connections to get into the (and nearly flunk out) and whose political career is and has been marked by the influence of lobbyists and special interest spokesmen of dubious allegiance. The cattle at this Maverick's ranch seem to have dubious markings on them and maybe it's time someone did brand John McCain's cattle.

The House GOP's new slogan -- "the change you deserve" -- also happens to be the marketing slogan for an anti-depressant drug.