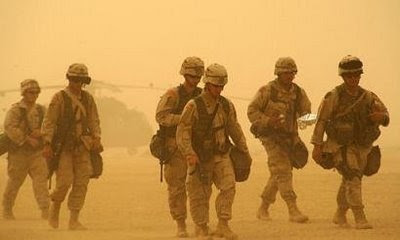 In a stunning if temporary reversal of fortune for the Bush administration, 100 House Republicans voted "present" this week on a bill to pump another $100 billion of taxpayer money into the bottomless pit that is the war and the bill failed to pass.

Now you can be sure that it eventually will pass and our brave men and women won't be clomping around Sadr City in their bare feet or subsisting on care packages from home as the White House would have you believe.

The non-vote by those Republicans, many of whom face tough re-election fights in the fall, coming on the heels of John McCain cutting 95 years off of his "100 years in fantasy and yet another special election in which the GOP got creamed, should allay any fears about whether a President Obama and Democratic-dominated Congress will be able to push through a reasonable timetable for U.S. troop withdrawals.

The only question is whether the Democrats will have the cojones to do so even after a president who has played them for suckers (and no more so after restive mid-term voters gave them a mandate to end the war) goes back to Texas to search among the scrub brush for his squandered legacy.
McCAIN AS HERETIC
John McCain is a notorious flip-flopper. Taxes and immigration leap to mind. But he has been consistent in refusing to entertain any talk of troop withdrawals and has repeatedly chided Obama and Hillary Clinton (and that Mitt Romney guy) for even suggesting such a thing:

"I do not believe that anyone should make promises as a candidate for president that they cannot keep if elected. To promise a withdrawal of our forces from Iraq, regardless of the calamitous consequences to the Iraqi people, our most vital interests and the future of the Middle East, is the height of irresponsibility . . . [and] a failure of leadership."

So McCain's claim this week that he intends to end the Iraq war by the end of his first term as president -- as in 2013 -- is disingenuous in the extreme. And is all you need to know about how Mr. Straight Talk really is on the war -- as in hearing Obama's footsteps.

McCain simply doesn't have any other pots to piss in, be they the economy, health-care reform, education, or whatever. So he is a one-trick pony, running hard on a war that was wrong to begin with and has been utterly screwed up by the guy with the 27 percent approval rating.

Even McCain's 2013 timetable is bogus because it comes with preconditions,

These include a functioning democracy, political reconciliation and a dramatic decrease in violence, none of which are remotely attainable as the Al-Maliki government lurches from crisis to crisis and the successes of the Surge slowly and inextricably unravel.

So here's a modest suggestion: The notion of the Friedman Unit has gotten kind of shopworn, doncha think? So how about the McCain Unit?

THE PTSD SCANDAL GETS WORSE
I went pretty deep the other day in Exposed: The Silent Epidemic That Is Killing Our Iraq & Afghan War Vets and urge you to read both this article and the accompanying think piece on the anatomy of PTSD if you care about the kind of homecoming that emotionally wounded veterans are receiving.

If the sense of anger and frustration that I feel didn't come through, then I wasn't doing my job. But then neither is Dr. Norma Perez, the physician in charge of the PTSD program at a medical facility for veterans who told her staff to refrain from diagnosing the disorder because too many veterans were seeking government disability payments for the condition.

" 'Given that we are having more and more compensation seeking veterans, I'd like to suggest that you refrain from giving a diagnosis of PTSD straight out,' Norma Perez wrote in a March 20 e-mail to mental-health specialists and social workers at the Department of Veterans Affairs' Olin E. Teague Veterans' Center in Temple, Tex. Instead, she recommended that they 'consider a diagnosis of Adjustment Disorder.'

"VA staff members 'really don't . . . have time to do the extensive testing that should be done to determine PTSD,' Perez wrote."

In case you're wondering, adjustment disorder is a less severe reaction to stress than PTSD and has a shorter duration, hence is easier and cheaper to treat.

Might I add that there is a special place in hell for doctors who violate the Hippocratic Oath to save not tortured souls, but money.

FIGURING OUT FATSO
To a vast majority of Americans, radical Shiite cleric Moqtada al-Sadr is some guy with a scowl and weight problem who dresses funny and has the very annoying habit of reinventing himself just when it seems like he can be counted out.

Now comes veteran war correspondent Andrew Cockburn to remind us of how silly our perceptions are in Moqtada al-Sadr, the Shia Revival and the Fall of Iraq. Writes Rajiv Chandrasekaran in a Sunday Times of London review of the book:

"No Iraqi has negotiated the chaotic landscape of post-Saddam Iraq as deftly as al-Sadr. Written off by the Americans and many of his fellow Iraqis as an empty turban, an unstable young man who hails from a line of highly respected clerics but lacks religious education, a rabble-rouser more interested in picking fights than promoting harmony, al-Sadr has become the most powerful person in Iraq today. He commands a broad base of support in Baghdad's Shi'ite neighborhoods and across much of central and southern Iraq. His militia can hold its own against Iraq's new army and even the much better equipped American military. In Shi'ite areas, he can turn violence on or off with an order."

So now you know, no?
Posted by Shaun Mullen at 12:28 AM
Email ThisBlogThis!Share to TwitterShare to FacebookShare to Pinterest