Memorial Day (Observed): 'Things Are Really Bad Here In the States, Aren't They?' 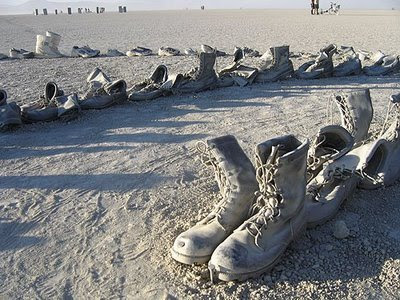 It is Memorial Day (Observed) today in the

If you don't already know, "Observed" is a euphemism for pulling up our national holidays by their roots and plopping them down into three-day weekends that have nothing to do with why they are supposed to be celebrated.

This one originally was called Decoration Day. It was a day of remembrance for Union soldiers who died in the Civil War. After World War I, it was expanded to include soldiers who died in any war. Nowadays it is called No Money Down and No Payments Until 2009 Day, at least down at the mall.

As always, I've hung an American flag outside of Kiko's House this Memorial Day (Observed).

As always, I will keep the day simple.

As always, I will remember that freedom of speech is not protected by journalists like myself but by the men and women who have given their lives to defend the values that have made America great but now seem to be honored in the breach -- if at all.

As always, I will feel sadness for loved ones and friends who will not be with us this Memorial Day (Observed) because of their sacrifices, and mourn the fact that the list of the departed has grown longer in the intervening year.

An Australian friend of a friend who lives in Hong Kong flew into New York City the other day. She exalted at its beauty and how clear the air war. It was Fleet Week and Lower Manhattan was awash in sailors and marines. But she was not fooled and after a day or so remarked, "Things are really bad here in the States, aren't they?"

Yes they are, Barbara.

This should be a golden age for but it is anything but. I cannot recall a time in my life when so few have so much and so many are struggling. When heart and soul -- the middle class -- is so beleaguered.

When we are incapable of a national consensus on anything beyond the shared belief that our leaders have so utterly failed us.

When we have a president so dangerously feckless that he can say with a straight face that he gave up golf in 2003 because it sent the wrong signal during the early months of the war in Iraq but has resumed playing because he has proven his solidarity with the troops.

I certainly agree about the inability to develop a national consensus. I dislike the fight-club politics. That is one reason to regret Ted Kennedy's likely departure from the Senate. He was one of the last who could bridge the gap without accusing the other side of inhuman characteristics.