Main Core: Much Ado About What? 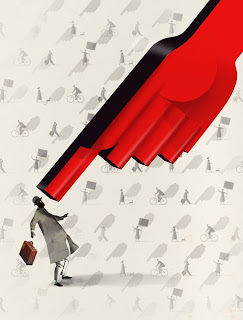 I quite honestly don’t know what to make of Main Core. That is the code name given to what some people claim is a super secret database of 8 million Americans who in the event of a national emergency could be subject to everything from heightened surveillance to detention.

My iffiness stems not from the desire of our government to throw an Orwellian net over a select segment of the populace.

No, what is stopping me from hiding in the basement the next time the threat level is raised to Code Red is that Main Core supposedly dates to the 1980s, which means that a goodly number of people have known of its existence for a couple of decades or so but only now intimations that there is such a program are dribbling out. That triggers a part of my investigative journalist's brain that says that if it has taken so long for something so big to see the light of day then there's a pretty good possibility that it's not what it seems to be.

This is of no concern to freelance journo Christopher Ketcham, who blogs at habeas corruptus and has a lengthy (as in really long) article in the current issue of Radar magazine that, while fascinating, doesn't do a whole more than make a circumstance case that Main Core exists.

"In the spring of 2007, a retired senior official in the U.S. Justice Department sat before Congress and told a story so odd and ominous, it could have sprung from the pages of a pulp political thriller. It was about a principled bureaucrat struggling to protect his country from a highly classified program with sinister implications. Rife with high drama, it included a car chase through the streets of , and a tense meeting at the White House, where the president's henchmen made the bureaucrat so nervous that he demanded a neutral witness be present.

The bureaucrat was James Comey, John Ashcroft's second-in-command at the Department of Justice during Bush's first term. Comey had been a loyal political foot soldier of the Republican Party for many years. Yet in his testimony before the Senate Judiciary Committee, he described how he had grown increasingly uneasy reviewing the Bush administration's various domestic surveillance and spying programs. Much of his testimony centered on an operation so clandestine he wasn't allowed to name it or even describe what it did. He did say, however, that he and Ashcroft had discussed the program in March 2004, trying to decide whether it was legal under federal statutes. Shortly before the certification deadline, Ashcroft fell ill with pancreatitis, making Comey acting attorney general, and Comey opted not to certify the program. When he communicated his decision to the White House, Bush's men told him, in so many words, to take his concerns and stuff them in an undisclosed location."