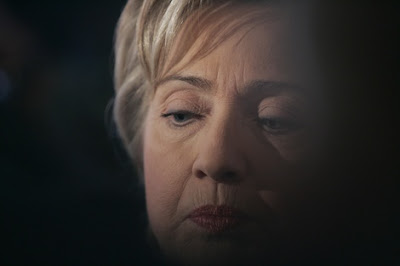 See? Dust. Just like the rest of 'em. I don't know what’s coming next, but I do know it's gonna be just like this. Hard. Painful. But in the end it's gonna be us. If we all do our parts, believe it, we'll be the ones left standing. Here endeth the lesson.

Mark it on your calendars: June 3, 2008 is Judgment Day for Hillary Clinton.

This is the end of the Democratic primary season with votes in South Dakota, Montana and Puerto Rico and the day when Clinton will have to exercise one of two options:

* Graciously concede that Barack Obama has beaten her in both the delegate and popular vote and that she looks forward to working with him to defeat John McCain.

* Vow to continue on to the national convention in the hope that Obama throws a rod or there is a development so earth shaking that she becomes the default nominee.

How else to interpret the embarrassing flapdoodle that Clinton is blathering in comparing Florida and Michigan delegates who were booted because their state parties did not play by the rules to which she and Obama had agreed to epic struggles to free the slaves and win the right to vote for blacks and women? Or to fraudulent elections in Zimbabwe?

* * * * *
The dissonance coming from Clinton and her advisors as she has fallen further behind Obama has ranged from vexing to infuriating, but about all I can feel now is a mixture of frustration and sadness.

Meanwhile, Jill Miller Zymon offers a whip-smart list of ways to allow embittered Clinton supporters to vent before enlisting them as foot soldiers in the most important electoral battle in generations.

John Dickerson says that Clinton's situation is like a quantum physics problem, as in how long can a body exist in a state approximating motionlessness without actually stopping?

Ruth Marcus notes that Clinton managed to win more votes than any primary candidate in history save for one (Obama) and says that simply can't be squared with the notion that her candidacy exposed a deep vein of misogyny.

While Jonathan Alter sarcastically says that Clinton's message for uniting the party is to erase her popular vote deficit in Puerto Rico on June 3 and then proclaim that she is the winner based on voters who cannot vote in a general election but has had the nomination snatched away by a man.

Josh Marshall says that seating Florida and Michigan delegates would not make any difference to Clinton, that they will be seated at the convention anyhow, a moral victory that will be tainted by her cynicism.

* * * * *
The Dear Friend & Conscience looks at the fall election as a referendum on where the Supreme Court will go in coming years, and she's certainly right in that there may be no decision greater for the next president than who to appoint to replace a Justice Stephens or Ginsberg.

There is much talk that Clinton would make a terrific justice and I would like to believe that this would be an appropriate consolation prize.

But I wince at the thought of the Republican minority on the Senate Judiciary Committee raking her over the coals for some of the downright nutty things that she has said in recent weeks, as well as trying to change the rules at the end of the race that she and her opponents had agreed to at the beginning of the race. And that's just for openers given her polarizing brand of politics.

Hat tip to John D'Amato at Crooks & Liars for Buffy quote
Photograph by Stan Honda/AFP-Getty Images
Posted by Shaun Mullen at 1:30 AM
Email ThisBlogThis!Share to TwitterShare to FacebookShare to Pinterest

Maureen Dowd had some suggestions for Obama in a recent column in the Times entitled Is She a Trojan Rabbit?

Why haven't the superdelegates decided the result already? Could it be that they, like Hillary herself, think that Obama would be bad for the Party? They want to be able to come out for Obama if he is the nominee, but they are hoping against hope that he isn't.