Barack Obama, The Purple Belt & 'Yet Unclosed Scab’ Of Racism In America 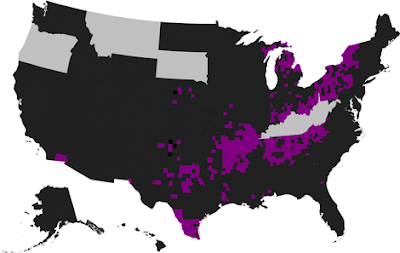 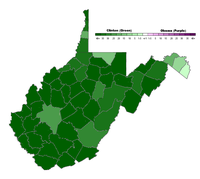 Purple areas are where Clinton got 65-plus percent of the to-date primary vote. Green areas are West Virginia districts she won.


An alien from another planet could be excused for getting whiplashes (this particular alien has more than one head) in trying to decipher these results from voting in a strange land on planet Earth called the :

* In a state called , voters in a primary election went for a white woman over a black man by a lopsided margin.

* In a state called , voters in a special House election went for a white man riding the coattails of the black man who was drubbed in .

Ah yes, race in . Or, as Tony Blankley puts it, "the yet unclosed scab that has run deep through our history." But as the alien learns to its dismay, race is a lot more than a matter of black and white.

Well, that scab is going to be picked to a fare the well from here to Election Day and beyond. And while I would much rather hear about health-care reform, getting the hell out of or nuclear non-proliferation, the discussion is long overdue.

But all of the talk that Barack Obama "transcends race" as he marches toward a rendezvous with destiny as possibly the first African-American president is as silly as the talk that he has "a blue-collar" problem because of his race.

While the presumptive Democratic nominee has not been shy to confront race, as he did in his extraordinary speech in on March 18, there is no evidence that people who normally wouldn't vote for a black person for dog catcher are flocking to him. Nor is his difficulty in attracting less educated, less affluent voters from union households during the long primary season necessarily race based. It's class based and it so happens that a majority of the members of that class are white.

Those of us for whom race, gender and number of heads are not factors when we vote for dog catcher or president were painfully reminded on Tuesday in West Virginia that race was perhaps the biggest issue, and may have been a factor in the areas in the purple belt in the large map above.

(Blankley correctly suggests that West Virginia also would have been a huge negative for someone like Colin Powell who, pardon the term, is about as white bread as prominent blacks get, so it's not necessarily just an Obama thing.)

Anyhow, this purple belt runs roughly from parts of through parts of , , , the , , and to the southern tier of state. And of course Obama failed to win a single district for the first time in a 2008 primary and an astonishing number of voters made no secret of not voting for him not on the basis of class but race. After all, Hillary Clinton is an Ivy League "elitist" like him, but she is not black.

As DHinMI, a blogger at Daily Kos notes, despite some recently emergent pockets of affluence, the racial and cultural character of the purple belt has been more static than any place in the U.S. since forever and most of it encompasses an area known as Appalachia.

This region is notable for being overwhelmingly white and disproportionately elderly, for having few medium- or large-sized cities, third-world poverty rates and ethnic sensitivities that skew heavily to support for "their own kind" and not outsiders. And as Josh Marshall reminds us, back in the day the residents of Appalachia hated both slaves and slave owners.

Does this mean that the burghers of and environs are racists or bigots or whatever? Or just culturally conservative?

Answering that question is out of my league, but I do believe that they see someone like Obama to be a threat to their way of life, whereas the areas where Obama has done well tend to be multi-ethnic and multicultural, although not exclusively so since there are substantial swaths of black on the big map have neither attribute.

As it is, the voters in the purple belt comprise only about 20 percent of the electorate, but to deny that there are not rich veins of racism elsewhere in the U.S. is to deny the obvious: Despite enormous gains by non-white Americans, racism is alive and well 40 years after the assassination of Dr. Martin Luther King.

A consequence of this is that presumptive Republican nominee John McCain and his party of old white guys will be a magnet for Democrats for whom skin color is their biggest issue.

The degree of that unfortunate-ness will be determined to some extent by the lengths to which McCain, who already is running hard on the GOP's "American-ness" theme, will be willing to pander to bigots given that he and his party are pretty much toast on the economy and other issues that really matter.

Another consequence is that the Republican Party, which has done a crack-up job of squandering its brand, let alone its hegemony in Washington and many statehouses, could become marginalized with a predominately Southern base. Perhaps it can rename itself the Purple Belt Party in honor of this signal accomplishment.

Posted by Shaun Mullen at 1:44 AM
Email ThisBlogThis!Share to TwitterShare to FacebookShare to Pinterest