What's A Jewish Voter to Do? 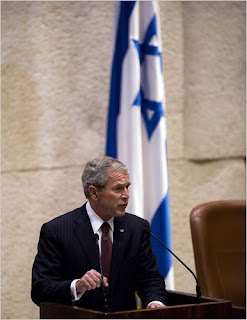 One can forgive Florida's substantial Jewish population for being confused these days. One day George Bush hints in a speech to the Knesset that Barack Obama is a Neville Chamberlain-like appeaser who would talk to enemies of Israel and the next day Israel is talking to its enemy Syria.

Were it only that simple.

A New York Times story today reveals that Sunshine State Jews -- and predominately older ones -- to be not only confused, but conflicted, paranoid and in some instances bigoted in their views toward Obama. Younger Jews, meanwhile, have turned out for Obama in respectable numbers.

All that noted, when it comes to enemies of Israel, it would be hard to beat the Bush administration.

As celebrates the 60th anniversary of its birth this month, I state unequivocally that I would sacrifice my life to defend my Jewish brothers and sisters. But once the bloody intransigence of Hezbollah and Hamas are duly noted, the anniversary is an especially bittersweet one because of the Jewish neoconservatives who hijacked the Bush presidency, and that needs to be hammered home.

Granddaddy would agree with me that these neocons have been the worst thing to happen to in a very long time because their fantasy of creating democratic, which is to say pro-Israel and therefore pro-Western states, in the was predicated on bellicosity and built on a willful ignorance of Arab and Muslim history.

That has been so abundantly apparent in , the first state where the neocons meddled. The result has been a slow-motion disaster that has taken many thousands of lives, been a sucking chest wound on the American economy and made Israel less safe, less able to leverage its interests, and the region as a whole less stable.

The timing of the Perle-Wolfowitz wet dream, coupled with the ham-handedness of Secretary of State Rice, could not have been worse for , and with friends like the Bush White House, who needs enemies?

Posted by Shaun Mullen at 1:23 AM
Email ThisBlogThis!Share to TwitterShare to FacebookShare to Pinterest