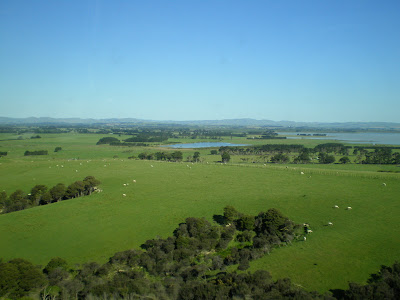 Commentary by COUNTRY BUMPKIN
I daresay the news will not have escaped you: Climate change isn’t happening, and if it is humans aren’t causing it. At long last the scientific fightback is taking place, and you’ll gather from my choice of phrase that I’m one of those pesky people who has grave doubts about the furore of recent years. Leaving aside the phenomenon that seems to overtake mankind once or twice a year — bird flu; SARS; asteroid strike; global cooling (back in the 70s) — there has been something about the way politicians and scientists have climbed aboard the present global warming bandwagon which seems not only unhealthy, but also off the wall. There’s just something about it which doesn’t ring true.

Here in the Wairarapa region of New Zealand (photo) we've just had the most magnificent summer. The curious thing about it is that locals have been saying to us, "This is what the summers were like 30 years ago!" We newcomers vividly remember the floods and tempests of our first couple of summers here back in 2003 and 2004, and we remember too the very hot days of February. This year, however, it was less warm than in previous years and now that we are well into the thick of autumn the temperature seems to our imperfect memories to be much lower. It is, my friends, very cold indeed.

The fever will no doubt pass, but just as the price of gasoline for our cars goes through the roof, with the predictable result that people are driving less, politicians are still thinking up all sorts of ingenious schemes for saving the planet just when the despised marketplace is doing the job for them.

There’s one great thing about fads — there"s always another one along in a minute.

It's been a long time since I wrote to you, and there's no good excuse I can offer. I’ve been spending a great deal of time working on the family archive, and all the documents in it — some 1,400 in all — have been translated and an abstract written into a Word document and sorted. There’s also scope for pictures, which lends a bit more interest to the document which is over 300 pages now. I’m in discussions with various people about where, eventually, to store the original documents so it’s all reached quite an interesting phase. All this has taken a couple of years now, and it’s time well spent.

Using the power of the computer to sort the abstracts has been a revelation because it allows me for the first time to see together all the correspondence on a given topic. I'm talking about things like the attempts to get New Zealand visas for the family we left behind when we left Germany; and the revelations after the war about how the assets of my father's parents, too numerous and bulky to go with them to the temporary accommodation inflicted on the Jewish residents of Neheim by the Nazis, were sold in the street and the proceeds banked at the town savings bank — in the account of the town itself! Nothing about those days has become less ghastly with the passing of time, I assure you. The archives also provide some late-life understanding of events in our household when I was a mere child, things only dimly remembered until now.

So you can see that there's an emotional element to all this, which makes me glad I began this gruelling task, all those months ago.

It's a year now since we were hard at working planning our trip to , and the fall-out from that adventure goes on even now. Not long after we got back I was asked to speak to a group about and the impressions we formed there, and as a direct result the invitations have been flowing in to do it again and again.

On present bookings I will have addressed 12 different groups by late July! The Probus Clubs are the interesting ones — there are at least 4 such clubs in Masterton alone, and 2 or 3 in Greytown. All have invited Sonia and me to a meeting, and the astonishing thing is that they get a turnout to their monthly shindigs of upwards of 120 people! (This is of course a direct result of the high average age of the Wairarapa population — but more than 120? Wow!) My wife grits her teeth and comes with me to every function, and in answer to my sympathetic enquiries whether she isn’t getting sick of hearing the same things over and over, she gamely says there is enough variation from one talk to the next, to keep her awake.

This is more than polite sociability, even when you take into account the nice collection of ball pens and gasoline vouchers I'm earning. Elderly Wairarapa people display a deep interest in , and the Holocaust and its consequences. The silence that falls over an audience when I describe what happened to my grandparents, and the efforts being made by Germans to recognise the guilt of their progenitors, is something to behold. World War II and its horrors are not forgotten, even by these people who while themselves too young (for the most part) to have been directly involved, all have family or friends who were. And they remember.

There was a lady yesterday when I spoke to the Breast Cancer Support Group here in Masterton, who said she found my German accent quite understandable. Did she come from herself? .

You could have knocked me over with a feather.

Country Bumpkin is my cousin, a bibliophile and man of the world who lives in New Zealand.
He is the author of Return to the Schilderwald -- A Jew Comes Home After Sixty-Eight Years. Among his other guest blogs are Country Reintegration, Country Castles, Country Travel, Country Polikarpovs, Country History, The Country Way of All Flesh, Country Images, Country Winter and Country Ice.