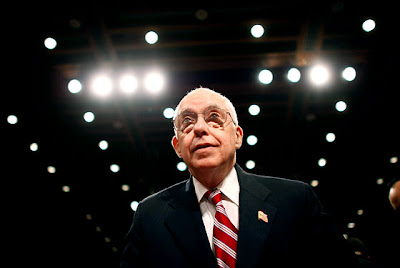 It seemed like Attorney General Alberto Gonzalez barely had two brain cells to rub together on the best of days, so his defense of the Bush torture regime was simple: Na-na-na-na-na! The president can do whatever he wants.

Michael Mukasey, who prepped for the job in the federal judiciary while Gonzalez was the president's lapdog, is a rocket scientist by comparison. After hoodwinking the Senate into confirming him because he promised that he'd have to look into this torture stuff, Mukasey has gone to great lengths to defend its use while approving an independent investigation into the darkest of all the dark aspects of the Bush administration that is anything but.

The crux of Mukasey's defense is that timid lawyering as a consequence of congressional investigations and reforms that grew out of the Iran-Contra affair and other intelligence scandals in the 1970s and 80s lulled the U.S. intelligence community into a state of somnambulence that contributed to the 9/11 terror attacks. And that criticizing John Yoo, David Addington and, yes, that Gonzo for throwing down the gauntlet is to ignore that the U.S. is more secure as a result.

Speaking at the commencement, Mukasey declared that:

"Today, many of the senior government lawyers who provided legal advice supporting the nation’s most important counterterrorism policies have been subjected to relentless public criticism. In some corners, one even hears suggestions—suggestions that are made in a manner that is almost breathtakingly casual—that some of these lawyers should be subject to civil or criminal liability for the advice they gave. The rhetoric of these discussions is hostile and unforgiving."

Mukasey's defense of Yoo and Company is underminded for two primary reasons:

* It grossly misrepresents the historic record, especially as it applies to the legal means that FDR used during World War II to deal with external threats, those congressional pushbacks that led to FISA and subsequently all of that so-called timid lawyering, and the extralegal means that Bush has used to rationalize and approve the use of Nazi-like interrogation techniques.

His claim that there is peril in debating the balance between civil liberties and national security is ridiculous. By his calculus, such debates can only lead to another cycle of timidity and potentially another 9/11. In other words, if Yoo is held responsible for using junk law to rationalize torture then his successors will be less inclined to give the president the legal tools he needs. And by the way, Congress should just butt out.

This bass ackwards logic has led law school prof Jonathan Turley to coin the term Mukasey's Paradox, which says that:

Mukasey's defense also is intellectually lazy because any controversial policy, including one that has the consequence of undercutting the U.S. as a signatory to the Geneva Conventions and lowers its moral standing in the world community, should be able to withstand the harshest scrutiny. Mukasey simply argues that any scrutiny is out of bounds.


Emptywheel, who has picked apart Mukasey's defense of the torture regime in his Boston College speech, concludes:

"Now, I'm not sure whether Muaksey's inclusion of Iran-Contra in his description of the causes of risk aversion implies all of these things, up to and including a disinclination to prosecute officials for lying to Congress. But it certainly makes the John Durham investigation--in which Mukasey directly oversees Durham's investigation into events that may well include lying to the 9/11 Commission and Courts--all the more dubious.

"Mukasey's public (though implicit) defense of Yoo to be unfortunate. But I find the logic on which he based that defense to be downright dangerous."

Posted by Shaun Mullen at 1:36 AM
Email ThisBlogThis!Share to TwitterShare to FacebookShare to Pinterest