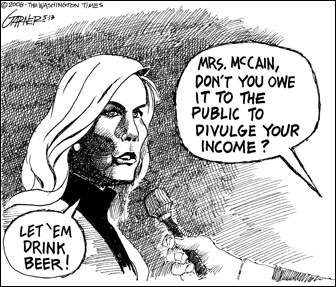 Cindy McCain refuses to release her tax returns. This is not just a questionable political decision that threatens to haunt her husband’s campaign for the next six months. It is also the wrong decision. Mrs. McCain needs to change her mind and release the returns as quickly as possible. How Republican John McCain, the presumptive presidential nominee who rightly fancies himself the king of transparency on Capitol Hill, and his campaign strategists can permit this open sore to fester is unimaginable.

Cindy McCain, whose husband has been a critic of the violence in , sold off more than $2 million in mutual funds whose holdings include companies that do business in the African nation.

The sale on Wednesday came after The Associated Press questioned the investments in light of calls by John McCain, the likely Republican presidential nominee, for international financial sanctions against the Sudanese leadership.

An Edwards Bounce for Obama in ?

Now that Senator John Edwards has endorsed Barack Obama for President, most pundits have looked at the long-term effect of his endorsement on white voters who initially supported Edwards but have since moved to support Clinton over the past few months. However, the central question on the importance of Edwards' endorsement may be demonstrated as quickly as next Tuesday's primary in .

is a close neighbor to Edwards' state of . Kentucky's demographics, which have striking similarities to West Virginia (race, age, median income and education background beyond high school), enables us to have a first look at any electoral benefit that Edwards' endorsement may have in a contest that Edwards' probably would have won if he were still in the race.

Did the House GOP caucus take a hard line on pork-barrel spending or adopt policies to cut federal spending? No. Republican voters and conservative pundits begged the House and Senate caucuses to make dramatic breaks with the previous six years and adopt real conservative policies of fiscal responsibility and federalism. What did they do? They offered to stop earmarking only if Democrats followed suit, a deal everyone knew would never take place. Instead of appointing one single anti-pork activist to the House Appropriations Committee in Jeff Flake, they appointed Joe Bonner, a good Congressman but a well-known earmarker, and mostly because Flake’s anti-pork crusade irritates his colleagues.

In another decade, it will be commonplace for women to be running Fortune 500 companies, starting their share of new businesses, and running for president. This will not take place because of Hillary Clinton. But her campaign is a very significant milestone along the road we have travelled to give women the respect and dignity – and the power – that men demand for themselves.

There is a feeling among some of McCain's fellow veterans that his break with them on can be traced, at least partly, to his markedly different experience in . McCain’s comrades in the Senate will not talk about this publicly. They are wary of seeming to denigrate McCain's service, marked by his legendary endurance in a prison camp, when in fact they remain, to this day, in awe of it. And yet in private discussions with friends and colleagues, some of them have pointed out that McCain, who was shot down and captured in 1967, spent the worst and most costly years of the war sealed away, both from the rice paddies of Indochina and from the outside world. During those years, McCain did not share the disillusioning and morally jarring experiences of soldiers like Kerry, Webb and Hagel, who found themselves unable to recognize their enemy in the confusion of the jungle; he never underwent the conversion that caused Kerry, for one, to toss away some of his war decorations during a protest at the Capitol. Whatever anger McCain felt remained focused on his captors, not on his own superiors back in .