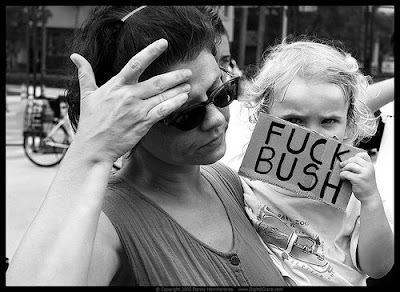 I know it's easy to forget that fact, or assume that Bush is now irrelevant, in the face of the media's round the clock coverage of every possible smidgen of information related to Obama and and their titanic struggle to win the Democratic nomination this Spring. Even of the McCain and his daughter's wedding got more press than Mr. Bush. But to assume that his overwhelming unpopularity with Americans, and his lame duck status makes him insignificant would be foolish. Far from it. As the months of his reign dwindle to a precious few he only becomes more dangerous.

COFFEEVILLE, — Democrats scored a remarkable upset victory on Tuesday in a special Congressional election in this conservative Southern district, sending a clear signal of national problems ahead for Republicans in the fall.

The Democrat, Travis Childers, a local courthouse official, pulled together a coalition of blacks, who turned out heavily, and old-line "yellow dog" Democrats, to beat his Republican opponent, Greg Davis, the mayor of Southaven, a suburb. With 99 percent of the precincts reporting, the vote was 54 percent for Mr. Childers to 46 percent for Mr. Davis.

The seat had been in Republican hands since 1995, and the district, largely rural and stretching across the northern top of , had been considered one of the safest in the country for President Bush's party, as he won here with 62 percent of the vote in 2004.

Having lost a similar Congressional race this month in Louisiana, Republicans had worked desperately to win this contest, sending Vice President Dick Cheney to campaign for Mr. Davis, along with Gov. Haley Barbour of Mississippi and former Gov. Mike Huckabee of Arkansas; President Bush and Senator John McCain recorded telephone messages that were sent to voters throughout the district.

As the Clinton campaign sagely points out "no Democrat has won the White House without winning West Virginia since 1916" and therefore Obama's primary loss shows that despite his large lead in the polls over John McCain, he can't possible win the election.

What's even more interesting is that no Democrat has won the White House without carrying Minnesota since 1912 (it went for Teddy Roosevelt's Bull Moose party) so given that Obama won Minnesota and Clinton won West Virginia, McCain is guaranteed to win the general election unless the eventual nominee can somehow completely replicate the social and political conditions prevailing in pre-WWI America. The outlook, in short, is very grim.

An important aspect of the presidential race so far has been the generational divide, with Barack Obama doing very well with younger voters and Hillary Clinton drawing strong support from those who are older. A similar split can be expected in a general election race between Senator Obama and John McCain.

However the election ultimately turns out, the Obama campaign has tapped into a constituency that holds powerful implications for the future of American politics. The youngest of these voters, those ranging in age from roughly the late teens to the early 30s, are part of the so-called millennial generation.

This is a generation that is in danger of being left out of the American dream — the first American generation to do less well economically than their parents. And that economic uncertainty appears to have played a big role in shaping their views of government and politics.

John McCain ought to immediately fire three lobbyists — Charlie Black, Tom Loeffler, and Peter Madaigan -- whose lobbying for brutal dictators and foreign governments is every bit as bad as the two lobbyists who left his campaign over the weekend. Frankly, McCain’s campaign is turning out to be an effort of, by, and for these types of influence peddlers. His credentials as a reformer are gone.