So What If The Guy Can Walk On Water? But Can He End The War In Iraq? 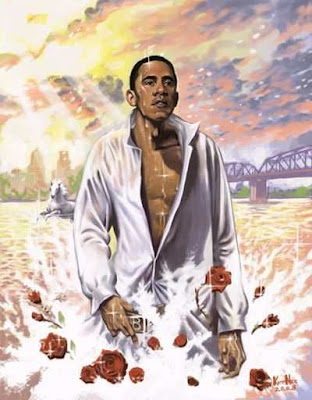 This image of Barack Obama has been getting a good workout in the blogosphere. Some think it is very gay, others representative of his followers viewing him as a Messiah. Your take?

Posted by Shaun Mullen at 1:26 AM
Email ThisBlogThis!Share to TwitterShare to FacebookShare to Pinterest

My first thought?...There's purple prose, and there's "purple art." Someone's got a crush! ;-)

I'm just trying to picture it as a campaign poster for FDR, or Truman, or even JFK. Can you imagine?