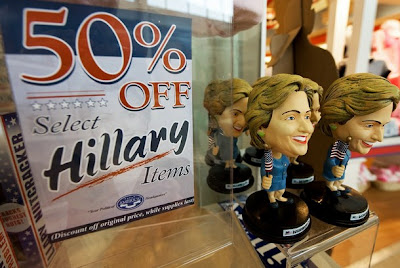 -- MIKE HUCKABEE
Republican presidential candidate Sen. John McCain's national campaign general co-chair was being paid by a Swiss bank to lobby Congress about the mortgage crisis at the same time he was advising McCain about his economic policy, federal records show.
JONATHAN LARSEN with KEITH OLBERMANN

By the time the Bush White House finishes with Scott McClellan, the former press secretary - and author of a new book that harshly disses the Decider - will be painted as a raving nut job who deserves to be carted off by the guys in white coats. But such has long been the fate of any former Bush aide who (belatedly) dares to declare in public that the emperor has no clothes.

If [Republican identity politics] works, it will be in part because we--by which I mean the media and many Democrats--believe it will. We are easily spooked by the confident swagger of the Republicans, who not so long ago were plotting permanent world domination. But then, so was Bear Stearns.

-- MARK SCHMITT
A Democratic Party rules committee has the authority to seat some delegates from Michigan and Florida but not fully restore the two states as Hillary Rodham Clinton wants, according to party lawyers. Democratic National Committee rules require that the two states lose at least half of their convention delegates for holding elections too early, the party’s legal experts wrote in a 38-page memo.
-- NEDRA PICKLER
There is a reason why society expects people to spend their golden years playing golf or touring the country in giant recreational vehicles. Some people age better than others, of course: the 65-year-old Harrison Ford looks sprightly enough in the new Indiana Jones film. But eventually the mind slows, the arteries clog, the ability to deal with new challenges dulls. The announcement this week that Edward Kennedy (76) is suffering from brain cancer is a reminder of life's most basic truth. Is really confident enough in Mr McCain's vitality to give him the most demanding job in the world? Not too many companies would even consider a man of his age for the CEO slot.

As you get yourself informed about politics, a beautiful model of your choosing will coach you through the process. Get questions right and the model will reward you with removed pieces of clothing. Make an Impact.

Hat tip to Donklephant for the image
Posted by Shaun Mullen at 12:00 AM
Email ThisBlogThis!Share to TwitterShare to FacebookShare to Pinterest